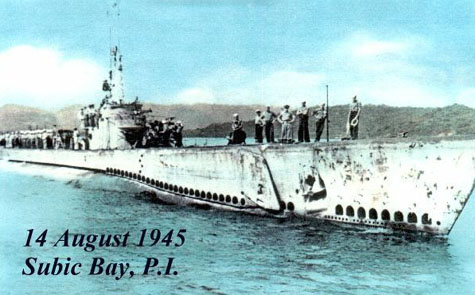 With the cessation of hostilities Blenny returned to San Diego arriving 5 September 1945. She operated locally from the San Diego area during the remainder of 1945. Between 1946 and 1951 Blenny made one cruise to China (August-November 1946); participated in a midshipman cruise to Canada; made two winter cruises in Alaskan waters (1947-48 and 1948-49); and participated in fleet maneuvers off Hawaii and local operations near San Diego.

In 1951 Blenny underwent conversion to a Guppy submarine and spent the remainder of the year operating in the San Diego area. Between May and November 1952 she cruised in the Far East during which time she conducted a 35-day reconnaissance patrol in support of the Korean operations. The boat spent 1953 conducting local operations along the west coast.

On 24 May 1954 Blenny reported to the Atlantic Fleet. Since that time she has operated out of New London Conn. and has participated in Atlantic Fleet NATO and anti-submarine warfare exercises in addition to operating with a submarine development group engaged in evaluating new equipment.


Add Your Name to the
SS-324 Crew Roster