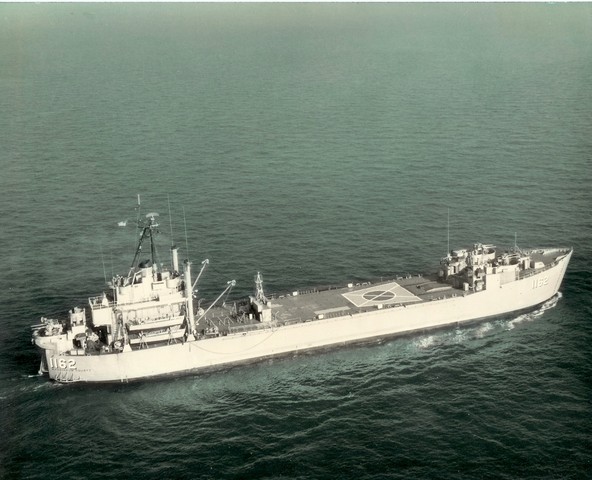 Named for: Wahkiakum County in Washington

Following shakedown in Guantanamo Bay, LST-1162 operated out of the Atlantic Fleet's amphibious force base at Little Creek, Va., for the remainder of 1953, conducting local operations out of Little Creek and off the coast of Florida. In 1954, the LST participated in Atlantic Fleet amphibious maneuvers "NprAmEx" and "LantFlex"-and conducted operations with the Operational Development Force out of Key West, Fla., testing antisubmarine warfare gear. Later during the year, LST-1162 visited Havana, Cuba, with embarked naval reservists. During March 1955, LST-1162 operated off Bloodsworth Island, conducting gunfire tests and serving as range safety vessel at the Navy's gunnery practive areas there. On 1 July 1955, LST-1162 was named Wahkiakum County.

For the next five years, Wahkiakum County pursued a regular schedule of operations off the east coast of the United States and into the Caribbean and Gulf of Mexico. Operating with the Atlantic Fleet's amphibious force, the LST served alternatively as a helicopter carrier-a precursor of the roles which other ships of her type would perform during the Vietnam war; as a shore bombardment safety vessel; an afloat gunnery training ship; and a transport for Navy construction battalions (CB's or "Seabees") and their equipment.

At the end of this period, she deployed to the Mediterranean and operated with the 6th Fleet from May to December 1960. She carried cargo and troops andparticipated in amphibious exercises with naval units of NATO powers in the Mediterranean. The ship underwent a major overhaul at Newport News, Va., in 1961, before she resumed active operations with a three-month Caribbean deployment.

Transferred to Amphibious Squadron (PhibRon) 12 on 1 July 1961, the LST participated in several amphibious landing exercises and contingency operations over the remainder of the year. During July and September, she transported midshipmen from Annapolis to Little Creek, Va., for annual summer training and began a three-month Caribbean deployment in September.

During the Cuban missile crisis in the  autumn of Wahkiakum County embarked the 2d Battalion, 8th Marine Regiment, and operated in support of the blockade of Cuba from 24 October to 7 December 1962. She  deployed to the  Mediterranean  in the  spring  of operating with the  6th  Fleet Amphibious  Task Force, and again to the Caribbean during the spring of 1964.

On 24 April 1965, supporters of the ousted Dominican Republic President Juan Bosch launched a coup d'etat in Santo Domingo, which soon degenerated into a civil war, with loyalists battling a rebel group backed by armed civilians. As the fighting threatened Americans there, the United States sent marines to protect and evacuate Americans. When it appeared that the revolt had been taken over by Castro's Cubans, the United States intervened with more men-paratroops of the 82d Airborne and marines. During the period from 9 to 17 May 1965, Wahkiakum County operated in support of this evacuation and intervention operation.

For the remainder of the 1960's and into 1970, Wahkiakum County operated on regular deployments to the Caribbean and Mediterranean.

Decommissioned at the Inactive Ship Facility, Orange, Tex., on 16 October 1970, Wahkiakum County was transferred to the Military Sealift Command (MSC) at Brooklyn, N.Y., on 10 April 1972. Reclassified as T-LST-1162, Wahkiakum County operated with MSC until struck from the Navy list on 11 January 1973. Transferred to the National Defense Reserve Fleet (NDRF) berthing area at Suisun Bay, Calif., soon thereafter, the LST disappeared from NDRF lists in 1974.