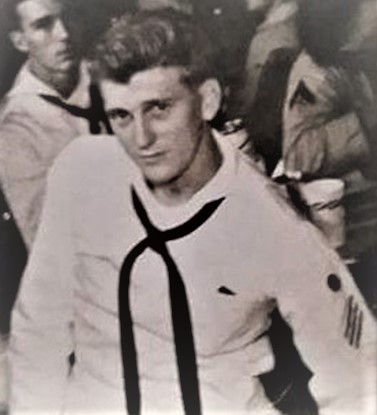 Initially named Tomahawk then renamed Waterway upon assignment to the United Kingdom LSD-15 was reassigned back to the United States and named Shadwell. She was laid down on 17 January 1944 by the Newport News Shipbuilding and Drydock Co. at Newport News Va.; launched on 24 May 1944; sponsored by Miss Mary Greenman; and commissioned on 24 July 1944 Lt. Comdr. William K. Brooks in command.

After shakedown Shadwell sailed from Hampton Roads on 26 August 1944. She transited the Panama Canal on 1 September and headed for San Diego where she laid over for a docking period. After almost a month at San Diego she departed on 2 Octoher to join the Pacific Fleet. Upon arrival Shadwell was employed in the transportation of heavy amphibious equipment between the islands of the southern Pacific. During this time she visited Tulagi and Guadalcanal in the Solomons Espiritu Santo on the New Hebrides Manus in the Admiralties and Hollandia and Aitape on New Guinea.

On 28 December 1944 Shadwell embarked elements of the 1060th Engineer Battalion United States Army and sailed from New Guinea with Task Force 78. Though her convoy came under continual submarine surface and air attack so efficient were the screening units that Shadwell's guns remained silent throughout the entire voyage to Lingayen Gulf Luzon P.I. However on 9 January 1945 (Lingayen D-day) Shadwell's gunners proved their worth by splashing a Zeke. Shadwell returned immediately to the staging area at Hollandia New Guinea embarked additional troops of the 1060th Army Engineers then departed for Leyte P.I. At Leyte she joined Task Group 78.8 which soon made for Lingayen.

On the evening of 24 January 1945 the task group was sailing south of Siquijor Island in the Philippines when it was attacked by three torpedo bombers. Two were splashed bv the convoy's combat air patrol but the third escaped into the darkness. It soon returned swooping down from the hills on the island and pressed home its attack. The convoy's antiaircraft guns brought the enemy down but not before he was able to release his torpedo. The air-dropped "fish" struck Shadwell just forward of amidships on the starboard side tearing a hole in her bottom 60 feet wide. The landing ship was taking water badly and soon began to sink. The convoy steamed on while two destroyers stood by to evacuate her crew if necessary. Shadwell's crew worked frantically to save their sinking ship and by morning their efforts were rewarded. Shadwell was steaming under her own power steering for Leyte by trick wheel. Of the more than 500 men aboard Shadwell at the time there were no fatalities and only three casualties all only slightly injured.

Temporary repairs were made at Leyte and when she was deemed seaworthy Shadwell steamed on to Manus in the Admiralty Isiands. There she went into drydock and underwent further temporary repairs before crossing the Pacific for permanent repairs. On 4 May she reached Bremerton Wash. and entered the Navy Yard. Just over two months later she departed the yard to rejoin the fleet sailing on 11 July. She stopped over at San Francisco Calif. on the 14th and 15th fueled and took on ballast then set course for Hawaii. On 23 July she anchored in Maalaea Bay off Maui and the next day shifted to Pearl Harbor. On the 28th Shadwell set sail for the western Pacific specifically Eniwetok Atoll in the Marshalls. She arrived there on 6 August and departed on the following day bound for Samar in the Philippines. En route to Samar she was diverted twice first to Saipan then to Guam where she arrived on 13 August. Shadwell departed that same day to join the 3d Fleet and on the 17th two days after the cessation of hostilities she joined TG 30.8. Ten days later the landing ship arrived in Sagami Wan off Tokyo Bav and. two days thereafter moored in the bay itself. Shadwell remained moored at Tokyo through May 1946 operating the boat pool there.

Returning to the United States in mid-1946 Shadwell underwent preinactivation overhaul and on 10 July 1947 was placed out of commission in reserve. She was berthed at Orange Tex. as a unit of the Atlantic Reserve Fleet.

On 20 September 1950 Shadwell recommissioned at Orange Tex. and she operated for the next five years in the western Atlantic and Caribbean. Ranging as far north as Labrador Greenland and Newfoundland Shadwell participated in several Arctic circle expeditions and exercises including "Bluejay" and "Convex" in 1951 and "Pinetree" in 1953. The remainder of her time was spent along the eastern seaboard and in the Caribbean.

Ten times during the intervening 15 years Shadwell cruised the "middle sea" and visited its ports of call. In 1959 Shadwell became the first helicopter-carrying dock landing ship. In 1961 she underwent Fleet Rehabilitation and Modernization (FRAM) overhaul. She was in the Atlantic supporting the Cuban quarantine in October 1962. In February 1964. she participated in the amphibious exercise "Quick Kick V" on the coast of South Carolina. Seven months later during the passage to her sixth Mediterranean deployment Shadwell took part in Operation "Steel Pike" executed off the coast of Spain. In January 1968 she was in the Caribbean engaged in Operation "Spring Board."

During August 1968 Shadwell departed the Mediterranean after a five-month deployment. She entered Little Creek Va. on the 19th to begin inactivation overhaul. Eight months later on 9 March 1970 she was placed out of commission in reserve. On 9 September Shadwell was transferred to the James River Va. group of the National Defense Reserve Fleet. Through 1974 she remains berthed at James River.


Add Your Name to the
LSD-15 Crew Roster