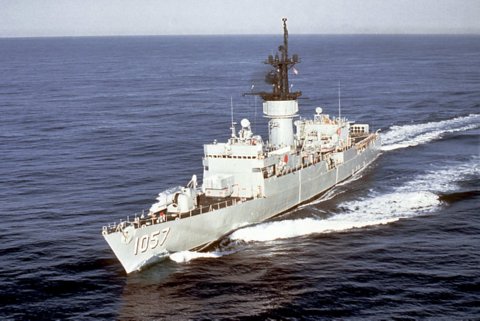 Named for: Variant spelling of the last name of John Rathbun (174

Rathburne arrived at her home port of Pearl Harbor, Hawaii on 20 July 1970 and spent the remainder of that year and the first quarter of the next engaged in weapons systems' testing and various exercises. On 14 April 1971, she departed Pearl Harbor for a six-month WestPac deployment, returning to Hawaii on 27 October for an extended upkeep period. After a short visit to the west coast in May and June 1972, Rathburne embarked upon her second tour of duty in WestPac 31 July 1972. She ended 1972 and began 1973 in the western Pacific, off the coast of Vietnam, and did not return to Pearl Harbor until 25 February 1973. She remained in the Pearl Harbor area throughout 1973 and is still operating there as of January 1974.