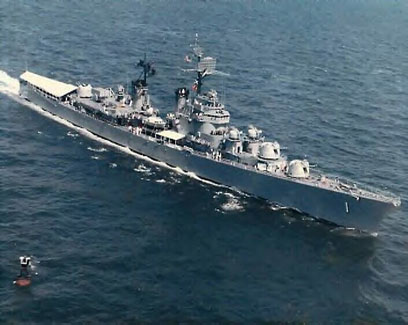 The first major U.S. warship built since World War II Norfolk was authorised in 1947 as an anti-submarine hunter killer ship which could operate under all weather conditions and would carry the latest radar sonar and other electronic devices. As a large destroyer leader designed on a light cruiser hull she could earry a greater variety of detection gear than a destroyer.

On 10 May 1960 an 83-foot Cuban vessel harassed Norfolk while she was patrolling the Florida Straits with The Sullivans (DD-537) in international waters.

In Fall 1961 she took part in UNITAS II as flagship for Commander Cruiser Destroyer Flotilla 2. During the operation she performed ASW training exercises with the navies of Venezuela Colombia, Ecuador, Peru, Chile, Argentina, Uruguay, and Brazil. Norfolk repeated this cruise over the next five years during which she served as flagship of Commander South Atlantie Forees except in 1962 when she was flagship for Commander Cruiser Destroyer Forces Atlantic Fleet.

Norfolk joined LANTFLEX 66 as flagship between 28 November and 16 Deeember 1966. During this exercise she was shadowed by the Russian trawlers Repiter and Teodilit. She proved her antisubmarine capabilities again as flagship for Comma nder South Atlantie Forces during UNITAS VIII in Fall 1967.


Add Your Name to the
DL-1 Crew Roster