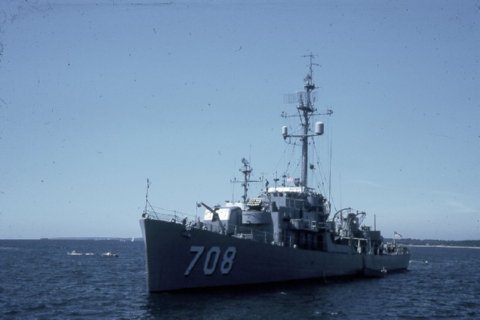 Final Disposition: Sunk as a target off the Florida coast 27 October 1970

After shakedown off Louisiana and Bermuda, Parle was assigned to the Atlantic Fleet for convoy duty, completing one Atlantic-Mediterranean voyage before her permanent assignment to Escort Division 60. She returned to the yards to be fitted out for Pacific duty. On 28 December she sailed for Panama, arriving 3 January 1945. After reporting for duty with the 7th Fleet, she was assigned to the Philippine Sea Frontier and routed to Leyte by way of Galapagos, Bora Bora, Manus and Palau.

As an escort with Task Unit 94.18.12 she carried out numerous operations between Kossol Roads, Leyte, Lingayen, Subic, New Guinea, Okinawa, Ulithi and Hollandia. Although engaging in repeated attack runs on sound contacts, during these escort assignments, she never made positive contact with the enemy.

In August 1945, Parle was with the Amphibious Forces of the Pacific Fleet engaged in escorting occupation troops to Korea. In January 1946 she joined the Atlantic Reserve Fleet at Green Cove Springs and decommissioned 10 July.

Parle recommissioned 2 March 1951 at Green Cove Springs, Fla. and following shakedown, operated with the Atlantic Fleet out of Norfolk and Nova Scotia. During the first quarter of 1952 she underwent training at Guantanamo Bay and was then sent to Key West, in March, for duty as a training vessel with the Fleet Sonar School. The latter part of the year found her in the North Atlantic and Baltic Sea areas engaged in fleet exercises.

The succeeding years, through 1958, were spent in training in ASW tactics out of Guantanamo, off the Virginia Capes and Norfolk with interim periods for overhaul and readiness evaluations. Parle periodically provided services to the Fleet Sonar School and Type Commanders.

On 1 January 1959, Parle was transferred to the operational control of the Commandant, 5th Naval District and designated as a Naval Reserve Training Ship, Group 1. Her compliment was reduced and she was assigned a mobilization crew of Reservists for training and augmentation. As a training ship for the reservists she conducted year-round schedules of two-week cruises, other than periods for upkeep.

During a heightening of world tensions in August 1961, President Kennedy called for partial mobilization of the Reserves. Parle received her reserve crew 26 October, bringing her to full complement, and she commenced a year of duty with the active fleet. Following additional training to peak the performance of her new crew, Parle assumed patrol duties in the Caribbean.

In July 1962, Parle detached the Reserve crew and reverted to inactive status as a Reserve Training Ship. In August she was placed in service in reserve and retained in a training capacity. She has since continued her training duties, operating from her Great Lakes home port of Chicago, III.

Into 1970 Parle continues a vital service to the U.S. Navy and the U.S. Naval Reserve Training Program.


Add Your Name to the
DE-708 Crew Roster