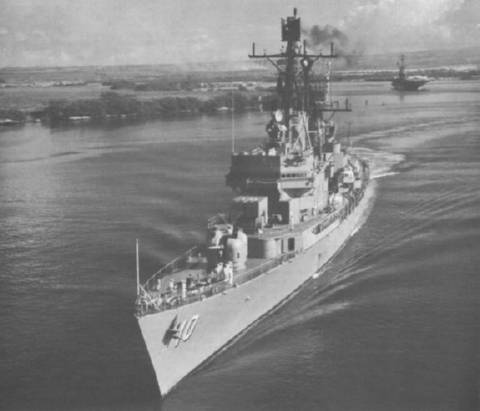 After shakedown along the coast and in Hawaiian waters King continued training out of San Diego for the remainder of 1961. Following extensive preparations the guided-missile frigate sailed on her first WestPac cruise 7 June 1962 strengt hening the mighty 7th Fleet with her Terrier missile arsenal. Operating with this mighty peacekeeping force King helped to check Communist aggression in Southeast Asia.

The guided missile frigate operated off the West Coast until heading back for the Western Pacific 26 May 1966. On this cruise she carried a helicopter for search and rescue missions to save American pilots during strikes against North Vietnam. She arrived Da Nang South Vietnam 27 June. During July she saved five downed aviators including one who was rescued from deep within North Vietnam by the ship's daring helicopter crew. In August the ship was stationed in a positive identification and radar adviso ry zone (PIRAZ) in the Gulf of Tonkin to help protect American ships from enemy aircraft. Before she was relieved she had checked over 15 000 aircraft. During this duty she also rescued seven pilots whose planes had gone down during strikes against enemy targets. She continued this duty except for brief runs to Hong Kong and Subic Bay until relieved by Long Beach (CGN-9) on 29 November.


Add Your Name to the
DDG-41 Crew Roster