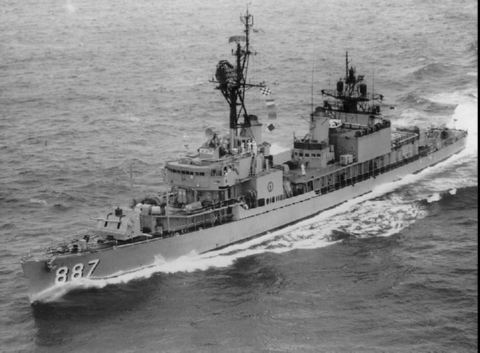 Brinkley Bass conducted her shakedown cruise in the Caribbean and then proceeded to San Diego for duty with the Pacific Fleet arriving February 1946. From San Diego she proceeded to Shanghai China via Pearl Harbor and Guam for duty with Commander Naval Forces Western Pacific. Upon reporting in the spring of 1946 Brinkley Bass served as mail ship between the naval commands at Shanghai Tsingtao and Hong Kong.

In November 1949 she reported to Commander Naval Forces Far East. She participated in Far Eastern Air Force defense operations conducted training and patrolled in Tsushima Strait. She returned to the United States in June 1950.

On 6 November 1950 Brinkley Bass departed San Diego in company with Destroyer Division 52 and proceeded to the Korean war zone. On 25 November she joined TF 77 for support of carrier operations off the east coast of Korea. During one period of 53 days she remained constantly at sea. On 16 May 1951 she reported to TF 95 or duty with the Wonsan Harbor Bombardment Element. During 30 days of operations at Wonsan Harbor she was engaged in frequent bombardments of enemy shore installations inflicting great damage. On 20 May 1951 while engaged at Wonsan Harbor Brinkley Bass was hit by shells from enemy shore batteries which killed one and wounded nine of her crew.

Destroyer Division 52 was relieved on station at Wonsan 27 June. On 18 July Brinkley Bass after a most successful combat cruise proceeded homeward to San Diego arriving 6 August. Brinkley Bass completed another Far Eastern tour during January-26 August 1952. Between 18 April 1953 and January 1954 she conducted another Far Eastern tour during which she spent most of her time underway with TF's 77 and 95 with a few brief interruptions such as the Formosa Patrol Wonsan Shore Bombardment Element and hunter-killer exercises.


Add Your Name to the
DD-887 Crew Roster