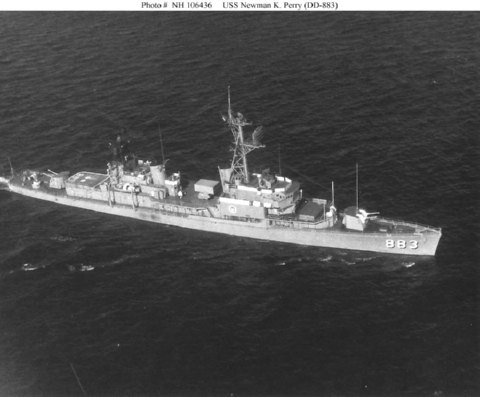 Following shakedown Newman K. Perry served briefly with the Atlantic Fleet. On 7 November 1945 she got underway for Pearl Harbor whence she sailed to Japan for three month's occupation duty. She returned to Pearl Harbor 28 March 1946 and was assigned to Joint Task Force 1 for operation "Crossroads" the 1946 atomic bomb test series at Bikini. Sailing for the Marshalls 27 May she witnessed tests "Able" and "Baker" and in August steamed for the United States.

On 18 August she arrived at San Diego whence she operated until 25 August 1947. Then with DesDiv 132 she headed west arriving at Yokosuka 13 September. Three days later she sailed to Tsingtao to commence a series of patrol escort search and rescue ASW and hydrographic survey missions and exercises along the China coast and off Taiwan and Okinawa. Relieved 5 May 1948 she returned to San Diego trained naval reservists through the summer and in October entered the Mare Island shipyard for overhaul.

The destroyer departed San Francisco 15 January 1949 and until April conducted exercises off the west coast. On 4 April she departed San Diego with DesDiv 182 for Newport her new homeport arriving 21 April.

After her return to Destroyer Forces Atlantic Fleet she rotated tours with the 6th Fleet in the Mediterranean and midshipmen and reservist training cruises and fleet squadron and type training exercises with the 2nd Fleet. Redesignated a radar picket destroyer in 1950 she conducted her scheduled operations as DDR-883 until 1964 when she resumed the designation DD-883. A change in operations in 1959 took her to Charleston S. C. which served as her homeport for several years before she resumed operations out of Newport.

A second change in operations took her to the Western Pacific for her overseas deployment in 1966. Departing Newport with DesDiv 201 4 October she transited the Panama Canal stopped in Hawaii Japan Okinawa and the Philippines and arrived on station in the Mekong Delta of South Viet Nam 23 November. Assigned to fire support duties she shelled enemy coastal storage areas until the 28th. She then shifted to Phu Quoe island off the Cambodian-South Viet Namese border to support Viet Namese and Special Forces units for five days returning to the Delta area in December. Other assignments on that tour with the 7th Fleet took her along the coast to the DMZ and then to the Gulf of Tonkin for planeguard and search and rescue missions. On 8 March 1967 she departed the combat zone for Hong Kong before returning to Subic Bay for the last time. On the 27th she departed the Philippines for the Mediterranean and Newport arriving 8 May.

After overhaul at Boston Newman K. Perry began 1968 with Caribbean exercises and on 4 April departed Newport for the Mediterranean to resume her annual deployments with the 6th Fleet. She has maintained that schedule into 1970.


Add Your Name to the
DD-883 Crew Roster