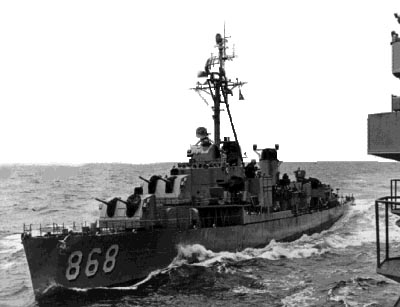 Brownson conducted shakedown in the Atlantic and Caribbean and was then placed in a reduced operational status at Bath Maine for six months. Resuming active operations in October 1946 she participated in Operation High Jump between November 1946 and April 1947.

Brownson spent the summer and fall of 1947 operating out of Newport. In February 1948 she took part in the 2nd Fleet exercises in the Caribbean and then Joined the 6th Fleet in the Mediterranean. She returned to Newport in June 1948 and spent June 1948 to May 1949 conducting reserve cruises.

In May 1949 she entered Boston Naval Shipyard for an extensive modernization which lasted until March 1950. She conducted refresher training in the Caribbean and in the summer of 1950 made a Midshipmen cruise in the Caribbean. She then participated in fleet exercises operating out of Newport.

During night operations on Bermuda on 8 November 1950 Brownson collided with Charles H. Roan (DD-853). She returned to Boston for repairs and further modernization. Leaving the yard in February 1951 she joined the 9th Fleet in the Mediterranean. The period between October 1951 and August 1952 was spent in the vicinity of Newport. In August 1952 she went to the North Atlantic with the 2nd Fleet for NATO's Operation Mainbrace. In October 1952 she rejoined the 6th Fleet in the Mediterranean. Returning to Newport in February 1953 she operated along the Atlantic seaboard and in the Caribbean until August 1954 with the exception of one Midshipmen cruise and participation in Operation Springboard.

She departed Newport 2 August for an extended tour in the Far East with the 7th Fleet. In the Far East Brownson cruised in Japanese Philippine and Korean waters until January 1955. Departing the Far East she returned to the east coast via the Suez Canal arriving at Newport 14 March 1955.

Since March 1955 Brownson has operated along the eastern seaboard in the Caribbean and in the Mediterranean.


Add Your Name to the
DD-868 Crew Roster