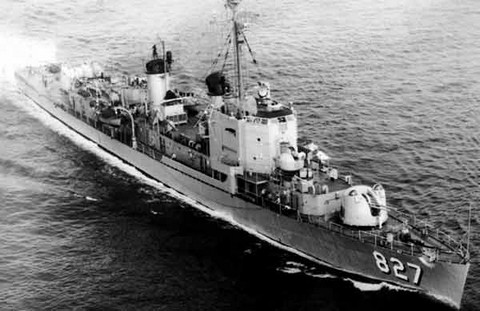 Following shakedown in February 1950 Robert A. Owens one of the first hunter-killer destroyers so designated was reclassified DDE-827 on 4 March 1950. She operated in the western Atlantic and the Caribbean until late 1952 when she deployed to the Mediterranean. From that time into the 1960's she operated with the 6th Fleet for 6 months out of every 18. During the remaining 12 months she conducted antisubmarine patrols off the Atlantic coast and in the Caribbean. In the fall of 1957 she added the North Sea to her operational area as she joined in NATO exercises.

In the 1960's Robert A. Owens continued to rotate between 2d and 6th Fleets. In November 1960 and February 1962 she assisted in the recovery operations for Project Mercury space capsules Mercury 2 and Mercury 6. After the latter Robert A. Owens sailed east to join TG Bravo for eastern Atlantic antisubmarine operations. Reclassified DD-827 on 7 August 1962 she was a unit of the Cuban Quarantine Task Force 136 during October and November. In January and February 1963 she conducted ASW operations in the Atlantic. March brought another period of patrol off Cuba; and in April Robert A. Owens again got underway for extended deployment. Duty in the Mediterranean the Red Sea and the Indian Ocean followed and on 23 December she entered the Norfolk Naval Shipyard for Fleet Rehabilitation and Modernization overhaul.

Completing overhaul on 15 November 1964 Robert A. Owens served as schoolship for the Fleet Sonar School and after refresher training at Guantanamo Bay joined the Recovery Force for Gemini-Titan (GT3) in March 1965 and Gemini-Titan (GT4) in June. On 27 November she sailed for an extended deployment to the 6th Fleet and Middle East Force returning to Fleet Sonar School ship duty in May 1966. She then operated in the Atlantic until deploying to the Mediterranean during the first 5 months of 1967. The balance of the year was spent in Atlantic operations schoolship duties and overhaul which was completed 11 March 1968.


Add Your Name to the
DD-827 Crew Roster