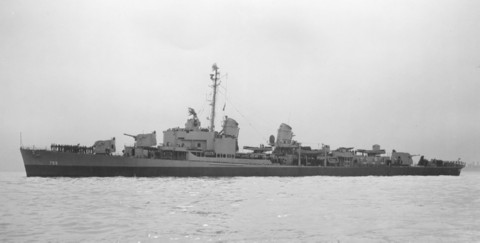 The USS LOFBERG (DD-759), an Allen M. Sumner class destroyer, was commissioned on 26 APR 1945. Built by Bethlehem Steel shipyard in San Francisco, USS LOFBERG sailed for the firhgt against the Japanese but missed the end of the war. LOFBERG served on occupation duty in the Far East before returning to the US. Over the ensuing years of her service career USS LOFBERG steamed the Pacific at war, during Korea and Vietnam, and at peace. USS LOFBERG served her country for 25 years, 8 months and 20 days, until decommissioned on 15 JAN 1971. LOFBERG was sold to the Republic of China (Taiwan) in 1974.

Final Disposition:To Taiwan 6 May 1974 and cannibalized for spare parts.

After shakedown. Lofberg departed the west coast for the war zone. Since the formal surrender of Japan occurred almost 6 weeks before she arrived Tokyo Bay 13 October this trim fighting ship turned to occupation duty. First came the clearing of mines from Japanese harbors then a series of shuttle runs between Okinawa and Shanghai and finally her return to San Francisco 28 March 1946 with a group of marines embarked at Tsingtao China.

Lofberg was now temporarily assigned to the 3d Reserve Fleet. During the next year she restricted her sailing to short.2-week coastal cruises to train Naval Reserves. On 1 July 1947 Lofberg resumed operations with the Pacific Fleet as flagship for DesRon 7.

Three years later the outbreak of the Korean war tested the Navy's peacetime stress upon continuous training and physical readiness. On 30 September under the command of Comdr. R. W. McElrath Lofberg departed San Francisco on the first of three tours of duty in the new war zone. These operations extended over a 3-year period.

Upon her initial arrival in Korean waters she became part of the screen for the fast carriers of TF 77. Planes from these carriers played an important part in successful evacuations in November and December of U.N. troops from North Korean in the wake of Chinese Communist intervention. Shifted temporarily to TG 96.8 she participated in gunfire support missions first off Korea's west coast and then in company with Missouri (BB-63) against targets along the eastern coast. As on her two succeeding tours she also took part both in the naval siege of Wonsan Korea and the preventive patrolling of the Formosan Straits before returning home on 2 July 1951.

Even after the Korean armistice of July 1953 Lofberg continued to make annual voyages to the Far East to participate in the activities and responsibilities of the 7th Fleet. By the beginning of 1960 she had lost her flagship status to a more modern-type destroyer. Though called upon as a part of the 1961 South China Sea buildup during a new Laotian crisis this World War II vintage ship soon returned to San Francisco for a FRAM II rehabilitation and modernization.

Refurbished on 23 July 1962 Lofberg steamed forth to undergo a refresher training cruise and exercises designed to teach the effective use of her new helicopter flight deck. On 22 September she joined DesDiv 153 Pacific Fleet for tactical training as part of an antisubmarine hunter group. The following April 19th Lofberg departed the west coast to begin a new series of Far Eastern tours of duty. Lofberg completed her first assignment in time to spend Christmas 1963 at home but her following voyage lasted from 23 October 1964 until 17 May 1965. To the familiar Formosa Strait patrol was added in February new duties off the coast of war ravaged South Vietnam. These duties included participation in the coastal barrier patrol initiated to prevent the infiltration of men and supplies from Communist North Vietnam.

Once home from the newest war zone Lofberg underwent a 3-month drydock period and in October commenced tactical exercises in the southern California operation area. The destroyer reentered the South China Sea 26 April 1966 and during the next 6 months served first on Yankee Station and then provided gunfire support to Allied forces ashore. While assigned to the latter duties she participated in operation "Deck House II".

Since that time into 1969 Lofberg has continued to rotate duty with the 1st and 7th Fleets as those arms of the Navy seek to establish and keep peace in the Pacific.


Add Your Name to the
DD-759 Crew Roster