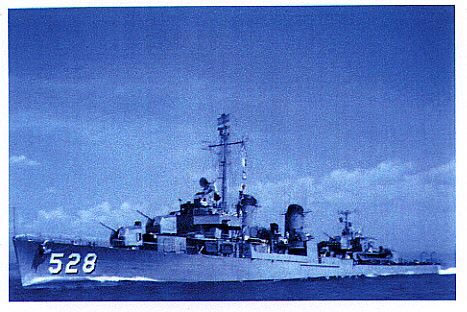 After shakedown and training off San Diego and escort duty in the Aleutians Mullany joined the 7th Fleet in the southwest pacific in December 1943. Her first action came 2 to 4 March 1944 when she protected minesweepers clearing the approaches to Seeadler Harbor Admiralty Islands prior to the amphibious landings on LOB Negros the island forming the northeastern side of the harbor. Attracting Japanese gunfire Mullany silenced the Japanese harbor defenses with 6-inch fire enabling the minesweepers to complete their vital mission. For the next 2 days Mullany fired to support American troops fighting ashore.

Screening 7th Fleet flagship Wasatch (AGC-9) during the invasion of Leyte Gulf Mullany fired to help drive off nine separate enemy air attacks from 20 to 29 October then sailed for overhaul at San Francisco. After training near Hawaii in January 1946 she Joined TF 64 for the invasion of Iwo Jima to which she escorted troop transports. After firing in the preinvasion bombardment she supported troops landing and fighting ashore hitting caves and machine gun nests on Mount Suribachi 19 February.

An antisubmarine picket guarding the Okinawa invasion force 6 April 1945 Mullany opened fire on a Japanese fighter plane at 1745 as the enemy made a low-level strafing attack aiming at her bridge. A few seconds later the fighter was smoking from numerous hits and veered right crushing in a shower of flaming gasoline between the ship's No. 3 and 4 mounts. Before damage control parties could remove all the wounded from the twisted metal and exploding ammunition the ship's depth charges exploded In the next 20 minutes three more enemy aircraft attacked stricken Mullany. Her forward gunners downed two and drove the other away.

With the bulkhead of one of the magazines and explosion apparently imminent at 1829 Comdr. Albert O. Momm ordered "abandon ship!" Gherardi (DMS-30) stood by to take on survivors while her rescue and assistance team continued to spray water on Mullany In the next hours Purdy (DD-734) came alongside the burning ship and extinguished the flames. Since the expected explosion had been prevented by punctured fuel and water tanks flooding the compartments above the hot magazine Commander Momm took a skeleton crew back aboard at 2300. They succeeded in lighting off one boiler and Mullany limped off on one shaft for Pearl Harbor and San Francisco arriving 29 May. Courage and determination had saved their ship but 21 of her crew were killed nine missing and 36 wounded.

Completely repaired Mullany put to sea 25 September for the Panama Canal and duty with the Atlantic Fleet until decommissioning 14 February 1946 to Join the Reserve Fleet at Charleston S.C. Recommissioned 8 March 1951 Mullany rejoined the Atlantic Fleet and by January 1954 had made three deployments to the Mediterranean to join in the peace-keeping missions of the 6th Fleet.

With her squadron DesRon 18 Mullany departed Newport 31 November 1954 for San Diego where the squadron was redesignated DesRon 21 for service in the Pacific Fleet. In the next 10 years Mullany served eight times in the western Pacific with the 7th Fleet Joining in patrol and training operations essential to the protection of freedom in Asia.

Veteran Mullany returned to combat during her ninth cruise to the coast of Asia screening carrier Independence (CVA-62) in flight operations off Vietnam in 1966 as well as serving as harbor defense ship at Da Nang and in shore bombardment at Qui Nhon. The following year she returned to the coast of Vietnam to seek out and destroy craft moving enemy supplies From 20 to 30 November 1966 she destroyed 28 enemy watercraft and damaged 26 others with her 5-inch guns. She screened Ticonderoga (CVA-14) until sailing for San Diego in March 1967. Following an overhaul at Long Beach Mullany spent the remainder of the year conducting refresher training and local operations off the Coast of California. In February 1968 she once again deployed to the Western Pacific returning in September. Into 1969 Mullany remains at Long Beach undergoing overhaul.


Add Your Name to the
DD-528 Crew Roster