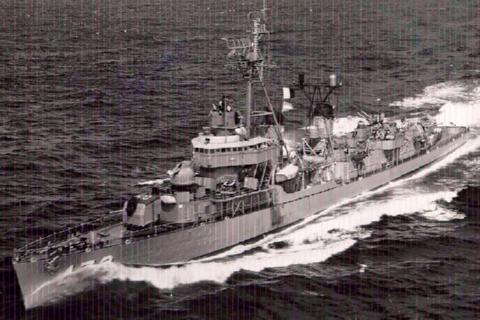 Reporting to the Atlantic Fleet she acted as escort to a westbound convoy to Halifax Nova Scotia and then returned to New York for her post-shakedown overhaul. On 6 February 1943 she left Norfolk as escort for H.M.S. Victorious. The vessels arrived at Pearl Harbor 4 March 1943. On 10 May after a training period Bache departed for the Aleutian Islands. She served in the Aleutian area until December 1943 taking part in the bombardment of Kiska. After a brief overhaul at Pearl Harbor she joined the 7 th Fleet 23 December 1943.

Upon completion of her overhaul she joined the 5th Fleet at Eniwetok 20 February 1945. Between 28 February and 5 March she provided Air support at Iwo Jima. On 1 April Bache arrived off Okinawa for screening and picket duty. She suffered slight damage 3 May when an enemy suicide plane overshot the ship and crashed into the sea. The same day she went to the aid of the stricken LSM(R)-195 and rescued her crew of 74. Remaining on this vital duty she helped destroy several enemy planes. On 13 May several enemy dive-bombers attacked the picket station and one completed a successful suicide attack on Bache. The wing of the plane struck near number two stack catapulting the plane down on the main deck amidships with its bomb exploding about seven feet above the main deck. Forty-one of the crew were killed and 32 were injured. All steam and electrical power were lost. Fires were brought under control within 20 minutes and she was towed to Kerama Retto Okinawa for temporary repairs.

Bache arrived at New York Navy Yard 13 July 1945 for permanent repairs and then went to Charleston S. a. for inactivation. On 4 February 1946 Bache went out of commission in reserve at Charleston.

In 1950 Bache was converted to an escort destroyer at Boston Navy Yard (reclassified DDE-470 2 January 1951) and recommissioned 1 October 1951. Bache was assigned to the Atlantic Fleet and since that time has made six cruises to the Caribbean for operations and training exercises and three cruises in the Mediterranean where she operated as a unit of the 6th Fleet.


Add Your Name to the
DD-470 Crew Roster