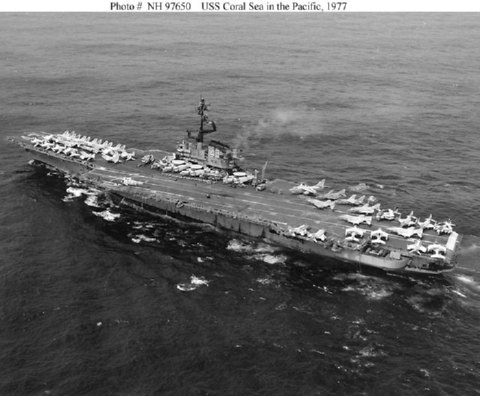 USS Coral Sea was commissioned in 1947. This Midway class large aircraft carrier was built at Newport News, Virginia. After initial operations, she made her first cruise in mid 1948 with midshipmen in training. In spring 1949, the Coral Sea began its first deployment with the Sixth Fleet. With the Cold War getting hotter, she went on several more deployments throughout the fifties.

Becoming an Attack Carrier
In October 1952, Coral Sea was reclassified to be an attack aircraft carrier, which changed her hull number to CVA-43. In early 1957, she was sent to the west coast to be modernized. In January 1960, the new and improved ship was returned to active service.

With a largely expanded flight deck and other upgrades, Coral Sea crossed the Pacific to join the Seventh Fleet. She participated in the Southeast Asian conflict from the early 1960’s into the early 1970’s. In spring 1975, the Coral Sea was reclassified CV-43 to reflect the expansion of her air group. During the late 70’s into the 1980’s, the ship began deploying further west to the Persian Gulf. In March 1983, she began a long voyage from the Mediterranean down to South and Central America. She returned to the Mediterranean a couple of years later.

After later voyages with the Sixth Fleet, she was decommissioned in April 1990.

An overhaul and local operations upon her return as well as training with Air Group 17 prepared her for a return to the Mediterranean once more on 20 March 1951. As flagship for Commander Carrier Division 6 she took part in a North Atlantic Treaty O rganization exercise "Beehive I." She returned to Norfolk 6 October for local and Caribbean operations next sailing for the Mediterranean 19 April 1952. While on service with the 6th Fleet she visited Yugoslavia and carried Marshall Tito on a one-day cruise to observe carrier operations. reclassified CVA-43 on 1 October 1952 she returned to Norfolk for overhaul 12 October.

Coral Sea trained pilots in carrier operations off the Virginia Capes and Mayport Fla. and in April 1953 she embarked the Judiciary Committee of the House of Representatives for a 3-day cruise. On 26 April the carrier sailed for a tour of duty in the Mediterranean. This cruise was highlighted by a visit to Spain and participation in NATO exercise "Black Wave" with Deputy Secretary of Defense R. M. Kyes on board as an observer. Returning to Norfolk 21 October she carried out tests for the B ureau of Aeronautics and trained members of the Naval Reserve at Mayport Fla. and Guantanamo Bay.

Sailing from Norfolk 23 July 1956 for Mayport to embark Carrier Air Group 10 Coral Sea continued on to the Mediterranean on her next tour. She participated in NATO exercises and received the King and Queen of Greece on board as visitors in Octo ber. During the Suez Crisis she evacuated American citizens from the troubled area and stood by off Egypt until November. She returned to Norfolk 11 February 1957. She cleared that port on 26 February and visited Santos Brazil; Valparaiso Chile; an d Balboa C.Z. before arriving at Bremerton Washington 15 April. Coral Sea was decommissioned for conversion 24 May 1957 and upon completion was recommissioned 25 January 1960 to rejoin the Fleet. During September 1960 she conducted training with her new air group along the west coast then sailed in September for a tour of duty with the 7th Fleet in the Far East.


Add Your Name to the
CV-43 Crew Roster