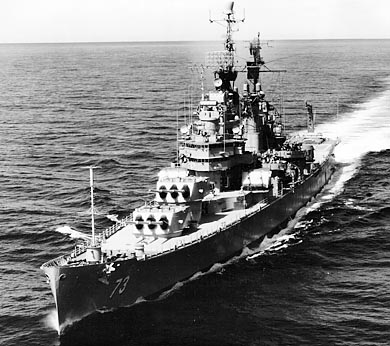 The USS ST. PAUL (CA-73), a Baltimore class cruiser, was commissioned on 17 FEB 1945. USS ST. PAUL was built at the Bethlehem Steel Shipyard in Quincy, Mass., and after shakedown training, with the war in Europe over, headed for the Pacific in May 1945. ST. PAUL participated in the the latter stages of the war against Japan, including raids on their home islands and was present in Tokyo Bay for the Japanese surrender. After WW II ST. PAUL alternated Far East deployments with state side service until the outbreak of the Korean War in mid-1950. USS ST. PAUL deployed three times in support of the United Nations effort in Korea, primarily providing shore bombardment. The latter 1950s brought the routine of Far East deployments and then a change of homeport to Yokosuka, Japan in 1959. After her return to the US, in 1966 USS ST. PAUL was featured in the movie "In Harm's Way". In 1966 USS ST. PAUL performed a series of five deployments to the waters of Vietnam, again providing shore bombardment. With her last return to the US, she moved to Bremerton, Washington. USS ST. PAUL served her country for 26 years, 2 months and 13 days, until decommissioned on 30 APR 1971. The hulk of the USS ST. PAUL was scrapped in 1980.

After shakedown in the Caribbean, St. Paul departed Boston on 15 May 1945 and headed for the Pacific. From 8 to 30 June, she underwent training out of Pearl Harbor and sailed on 2 July to join Task Force 38. This fast carrier striking force completed replenishment at sea on the 23d and then proceeded to launching points for strikes against Honshu, Japan's largest island. Between 24 July and 10 August, St. Paul screened the carriers as they delivered heavy air strikes on Kure, Kobe, and the Tokyo area in southern Honshu, then at Maizuru and various airfields in northern Honshu. During this period, St. Paul also bombarded industrial targets: first on textile mills at Hamamatsu during the night of 29 July, and then on 9 August at iron and steel works in Kamaishi, firing the war's last hostile salvo from a major ship. Typhoon warnings cancelled air operations on 11 August until the 14th. Then those launched that morning were recalled, after peace negotiations gave promise of Japan's surrender. On the 15th, all offensive operations against Japan were stopped.

St. Paul, with other units of the 3d Fleet, retired to the southeast to patrol the coast while awaiting orders. On the 27th, she steamed into Sagami Wan to support United States occupation forces. On 1 September, she entered Tokyo Bay and was there during the formal surrender ceremony the next day.

St. Paul remained in Japanese waters for occupation duty until she was ordered to Shanghai on 5 November to become flagship of TF 73. She navigated the Whangpoo River, anchored off the Shanghai Bund on 10 November, and remained there until late in 1946.

Returning to the Naval Shipyard, Terminal Island, Calif., on 1 October, she was overhauled to prepare for additional Far East duty. From 1 January to 15 February 1947, she conducted refresher training at San Diego.

Following her return to Shanghai in March, St. Paul resumed operations as flagship for CTF 71 until returning to the United States in November. Next came training operations along the west coast including cruises for Naval Reservists during April and May 1948. From August to December of that year, she deployed to the western Pacific, serving in Japanese and Chinese waters. Back in the United States, she was converted from catapult to helicopter configuration before serving again in the Far East from April through October 1949.

When hostilities broke out in Korea in June 1950, St. Paul was conducting a midshipman training cruise from San Francisco to Pearl Harbor. She disembarked the future naval officers and proceeded late in July to the western Pacific where she joined Task Group (TG) 77.3 on patrol in the Formosa Strait. St. Paul remained on patrol between Formosa and mainland China from 27 August to 1 November. She then moved north into the Sea of Japan to join carrier TF 77, and commenced combat operations off the northeast coast of Korea on 9 November. On the 17th, she provided gunfire support to the United Nations troops advancing on Chongjin. That day, shrapnel from a near miss by a shell from a Communist shore battery injured six men at gun mount stations. The cruiser destroyed the enemy emplacement with counter-battery fire and continued her support mission.

As the Chinese Communists began massive attacks late in November, United Nations forces commenced a general withdrawal to consolidate and hold south of the 38th parallel. St. Paul provided close support for the Republic of Korea I Corps on their east flank as they withdrew from Hapsu, and along the coast, as they retired from Chongjin. On 2 December, she moved north again; conducted night harassing missions above Chongjin; then moved south to support the withdrawal of the Republic of Korea Capital Division to Kyong-song Man. She entered the harbor at Wonsan on the 3d to provide a curtain of shellfire around that city as United Nations forces and equipment were moved to Hungnam; then followed the forces there, and remained to cover the evacuation of that city and harbor between 10 and 24 December.

From 21 to 31 January 1951, St. Paul conducted shore bombardment missions north of Inchon where, on 26 January, she was again fired upon by shore batteries. On 7 April, in special TF 74, with destroyers Wallace L. Lind (DD-703), and Massey (DD-778), Fort Marion (LSD-22) and Begor (APD-127), St. Paul helped to carry out raids on rail lines and tunnels utilizing 250 commandos of the 41st Independent Royal Marines. These highly successful destructive raids slowed down the enemy's resupply efforts, forcing the Communists to attempt to repair or rebuild the rail facilities by night while hiding the work crews and locomotives in tunnels by day.

St. Paul returned to the United States for yard work at San Francisco from June to September; then conducted underway training before sailing on 5 November for Korea. She arrived off Wonsan on 27 November and commenced gun strike missions. During the following weeks, she bombarded strategic points at Hungnam, Songjin, and Chongjin. In December, she served as an antiaircraft escort for TF 77; and, following a holiday trip to Japan, returned to operations off the coast of North Korea. In April 1952, St. Paul participated in combined air-sea attacks against the ports of Wonsan and Chongjin. On the 21st, while the cruiser was engaged in gun fire support operations, a sudden and serious powder fire broke out in her forward 8-inch turret. Thirty men died. Before returning to Japan, however, she carried out gunstrikes on railroad targets near Songjin, during which she captured nine North Koreans from a small boat. Following a brief stay in port and two weeks on the gun line, she headed home and reached Long Beach on 24 June.

On 28 February 1953, St. Paul departed the west coast for her third Korean tour and was in action again by April. In mid-June, she assisted in the recapture of Anchor Hill. With battleship, New Jersey (BB-62), she provided close support to the Republic of Korea army in a ground assault on this key position south of Kosong. The cruiser was fired upon many times by 75 and 105-millimeter guns, and observed numerous near misses, some only ten yards away. But on 11 July at Wonsan, she received her only direct hit from a shore battery. No one was wounded, and only her 3-inch antiaircraft mount was damaged. On 27 July, at 2159, she conducted her last gunstrike and had the distinction of firing the last round shot at sea in the war. The shell, autographed by Rear Admiral Harry Sanders, was fired at an enemy gun emplacement. The truce was effective at 2200. St. Paul then commenced patrol duties along the east coast of Korea.

St. Paul returned to the western Pacific again in May 1954; and, later that year, she was on hand when the Chinese Communists were threatening the Nationalist Chinese islands of the Quemoy group. Between 19 November 1954 and 12 July 1955, she operated with the 7th Fleet in Japanese and Chinese waters, particularly between Taiwan and the Chinese mainland, playing a major role in protecting United States interests in the Far East. She returned to Long Beach for repairs and overhaul, but was back in the western Pacific from 15 August 1955 to 10 January 1956, serving as flagship for the 7th Fleet.

St. Paul returned to Long Beach in February and subsequently moved to Bremerton, Wash., for upkeep and overhaul. In September, she became flagship for the 1st Fleet and entertained the Secretary of the Navy during a fleet review at Long Beach. She departed that port on 6 November; and, after refresher training at San Diego, arrived at Yokosuka, Japan, on the 29th to relieve Rochester as flagship of the 7th Fleet. She spent most of her time in Keelung or Kaohsiung, Taiwan, with periods of training in the Philippines and port calls at Buckner Bay, Hong Kong, Manila, and Sasebo. On 26 April 1957, she headed home.

St. Paul arrived at Long Beach on 21 May and subsequently cruised along the west coast, as far north as Seattle, until she sailed once more on 3 February 1958 for the Far East. She made an extensive cruise, beginning at Pearl Harbor. Thence she steamed to Wellington, New Zealand; proceeded past Guadalcanal and north through the Solomons to New Georgia; visited the Carolines; and ended at Yokosuka on 9 March. She repeated her past WestPac deployments with duties as flagship, and exercises in the Philippines, before returning to Long Beach on 25 August.

Sailing from Long Beach on 4 May 1959, St. Paul became the first major United States Navy ship to be homeported in the Far East since pre-World War II days. Based at Yokosuka, she did not return to Long Beach until 39 months later. Then, she assumed duties as 1st Fleet flagship and did not return to WestPac until 1965. From that year, she made five successful deployments with the 7th Fleet in operations off North and South Vietnam providing gunfire support to allied troops. Reminiscent of her Korean operations, St. Paul was hit on 2 September by a shell which struck her starboard bow, near the water line. None of her crew was injured; and her engineers repaired the slight damage, enabling her to continue her mission. For her splendid record of service in helping to combat Communist aggression in South Vietnam, St. Paul earned the Navy Unit Commendation and two Meritorious Unit Commendations.

At San Diego on 7 December 1970, St. Paul began inactivation procedures. She sailed to Bremerton, Wash., on 1 February 1971 where she was decommissioned on 30 April and was placed in reserve with the Puget Sound Group of the Pacific Reserve Fleet.


Add Your Name to the
CA-73 Crew Roster