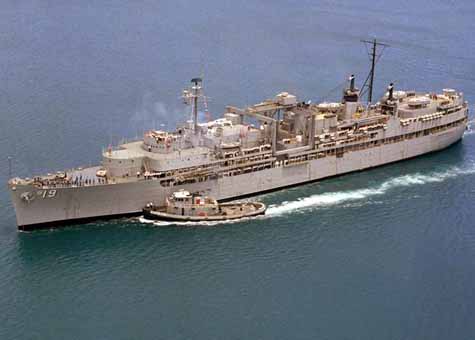 USS Proteus (AS-19) was laid down 15 September 1941 at the Moore Shipbuilding and Dry Dock Company, Oakland, CA. She as launched 12 November 1942 and after fitting out was commissioned 31 January 1944.

Proteus was a god of the sea in in Greek mythology. The word PROTEAN has the connotations of flexibility, versatility and adaptability. USS Proteus motto paralled this... Prepared Precise and Productive.

After commisoning and final fit out, Proteus sailed for Midway Island, arriving in May 1944. There until Decemeber 1944, she tended to the US Submarine Force that was battleing the Japanese. After a stay at Pearl Harbor from December 1944 to February 1945, USS Proteus moved on to Guam where she again was on station supporting the US Submarine Force.

At wars end, USS Proteus was assigned to Japanese home island occupation duty. She was in Tokyo Bay for the Japaneses surrender ceremony. Proteus remain in Japan until November 1945 then sailed for the United States.

Homeported in New London, CT after World War II, USS Proteus operated along the East Coast of the United States before being decommissoned and placed in service on 26 September 1947. In January 1960 USS Proteus began a conversion to support Polaris Fleet Ballistic Missile submarines. The conversion at Charleston Naval Shipyard was completed in July 1960 and Proteus was placed in commission. Refresher training was conducted at Guantanamo Bay, Cuba.

In February 1961 Proteus deployed to Holy Loch, Scotland. She remained at Holy Loch for two years upgrading and supporting the US Atlantic Submarine Force. In 1963 she returned to Charleston, SC NSY for overhaul.

Post overhaul, USS Proteus sailed where needed in 1964. She steamed for Holy Holy in December 1963. She moved on to Rota, Spain in February 1964, returned to Charleston in June 1964, then sailed to Gaum in October, where she remained homported until 1971.

In 1971 USS Proteus entered Mare Island NSY for overhaul. After overhaul she called on Pearl Harbor and Sydney, Australia, then again took up station on Guam. With the fall of South Viet Nam in 1975, throngs of refugees flooded the South West Pacific. Proteus crew members assisted US Navy SeaBees with the construction of a massive tent city to house more than 100,000 refugees.

USS Proteus was overhauled at Long Beach NSY during 1978-79, then returned to Guam in May 1980. With the decommisioning of the final Polaris Ballistic Missle Subamrines she departed Gaum in July 1981. Proteus was then converted to General Fleet Support Tender. She delpoyed into the Indian Ocean, plying her trade of maintenance and support of the fleet at Diego Garcia; Fremantle, Australia; Subic Bay, P.I. and then returned in April 1982 to Guam .

The June 15, 1991 eruption of Mount Pinatubo in the Philippines called USS Proteus to leave Guam and help dig out the Subic Bay Naval Base and nearby towns. She remained in P.I. until August, 1991 then returned to Gaum.

USS Proteus sailed to Australia in April of 1992 on her final voyage.

Proteus was decommissioned on 30 September 1992.

The USS Proteus (AS-19) operational history and significant events of her service career follow:


Add Your Name to the
AS-19 Crew Roster