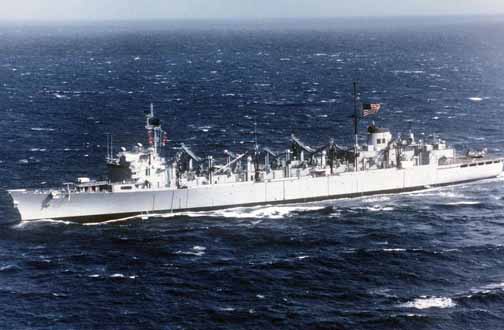 The USS SACRAMENTO (AOE-1), a Sacramento-class fast combat support ship, was commissioned on 14 MAR 1964. USS SACRAMENTO was built at Puget Sound Naval Shipyard in Bremerton, Washington and then homeported in Bremerton after commissioning. The "ship's work" that a Fast Combat Stores Ship "turns to" is passing the ammo, fuel and food while deployed in support of the Fleet. She deployed numerous times to the Western Pacific, extending into the Indian Ocean if called upon. Of note: Her main engines were from the never completed USS KENTUCKY (BB-66), abandoned on the ways after WWII. The engines were able to power SACRAMENTO to over thirty knots. USS SACRAMENTO served her country for 40 years, 6 months and 17 days, until decommissioned on 1 OCT 2004. The hulk of the SACRAMENTO was scrapped in 2008.


The third Sacramento (AOE-1), the first of the Navy's fast combat support ships, was laid down on 30 June 1961 at the Puget Sound Naval Shipyard, Bremerton, Wash.; launched on 14 September 1963; sponsored by Mrs. Edmund G. Brown; and commissioned on 14 March 1964, Capt. Mark M. Gantar in command.

Sacramento's turbines are two of the four originally built for Kentucky (BB-66), which was never completed. Her cargo capacity is more than 175,000 barrels or nearly eight million gallons of Navy Standard fuel oil, JP-5 aviation fuel, and aviation gasoline. Pumping capacity, to port and starboard simultaneously, exceeds 1.5 million gallons per hour. She can also carry 1,600 tons of ammunition, including missiles; 250 tons of refrigerated provisions, an equal amount of dry provisions and stores, and a sizeable load of miscellaneous freight and mail. Helicopter facilities include a loading area aft with hangar space for three UH-46 helicopters.

Seattle, Wash., was designated her home port. On 7 April 1964, Sacramento steamed out of the Puget Sound Naval Shipyard to begin her maiden voyage, three days of builder's and familiarization trials. On Friday, 12 June, Sacramento and Mars (AFS-1) rendezvoused about 35 miles off Point Loma, Calif., to test their new systems of replenishing.

Underway training with the Fleet Training Group, San Diego, commenced on 15 June. Following a call at Sai Francisco, the ship returned to Bremerton for replenishment-at-sea trials, followed by post-shakedown availability from 27 August through 9 October. The ship departed Long Beach on 28 November for her first WestPac deployment.

On 9 December, two days out of Pearl Harbor, Sacramento refueled Ticonderoga (CVA-14), Kearsarge (CVA-33), and five destroyers. She then continued on to Sasebo, Japan. Through this 175-day deployment, Sacramento provided in-port services; and, for four months, replenished ships in the South China Sea. She serviced 294 ships, transferred 35 million gallons of fuel, 1,191 short tons of provisions, and 670 tons of ammunition. During this period, she steamed over 39, 000 miles and called at Sasebo, Yokosuka, Hong Kong, and Pearl Harbor.

At the end of this "maiden deployment," Sacramento returned to Long Beach and then continued on to Bremerton for yard availability, which ended on 16 August. Refresher training and the usual preparations for sea preceded her second departure for WestPac on 14 October.

Arriving at Subic Bay on the 28th, she became an integral part of Task Force 73, the 7th Fleet replenishment and mobile logistics support force. She then steamed to Yankee Station off Vietnam's coast to begin duties on the replenishment line.

A typical cycle in Vietnamese waters consisted of two and one-half weeks on Yankee Station, a quick run back to Subic Bay for five or six days of in-port loading, then a return to station. This nine-month deployment ended with Sacramento's arrival at Seattle on 17 July 1966.

Sacramento stood out from Long Beach on 25 November to commence a third WestPac deployment and resumed her Yankee Station cycle for months of vital service before returning home. A fourth WestPac deployment commenced on 6 January 1968. After replenishing the 351st ship of that deployment on 15 June, she steamed for the west coast. From San Francisco, she proceeded to Bremerton for her first regular yard overhaul since commissioning.

From December 1968 to February 1969, Sacramento underwent the normal inspections, trials, and preparations for deployment. She again steamed west on 11 February, arrived at Subic Bay on the 28th, and five days later headed for Yankee Station. This deployment saw Sacramento complete 471 replenishments while steaming over 51,000 miles. Upon returning home at the end of September 1969, the ship spent three months in the Puget Sound Naval Shipyard and then commenced preparations for her next WestPac deployment.

Sacramento departed on her sixth WestPac deployment on 23 February 1970, after loading ammunition at Bangor and fuel at Manchester. She arrived in Subic Bay, P.I., on 15 March and, six days later, headed for Yankee Station. She continued making trips between Subic Bay and Yankee Station through August, taking time out to visit Yokosuka in June, and Hong Kong in July. On 5 September, she departed Subic Bay for San Diego, arriving on the 18th. Five days later, she moved to Puget Sound for ammunition offload, a standdown period, and restricted availability. The end of 1970 saw her still at Puget Sound.

On 8 January 1971, she sailed south to Long Beach, Seal Beach, San Diego, and San Francisco. In February, she returned to Washington to load stores for her seventh WestPac deployment. She departed Bangor on 1 March and entered Subic Bay on the 20th. Four days later, Sacramento exited Subic Bay on her first line swing of this tour. She sailed back and forth between Subic Bay and Yankee Station until 5 August, when she got underway for Sasebo, Japan, on the first leg of her voyage back to the United States. After stops at Long Beach, Seal Beach, San Diego, and San Francisco, Sacramento entered her new home port, Bremerton, Wash., on 2 September. She finished out 1971 on the west coast, commencing overhaul at Puget Sound Naval Shipyard on 1 December.

Sacramento remained in Bremerton through early June 1972, when she began post-overhaul operations off the west coast. This employment continued until 11 August, at which time she departed from Bangor, en route to Subic Bay. She replenished units of the 7th Fleet, off the coast of Vietnam, for the next six and one-half months, finally departing from Subic Bay on 23 March 1973. After visiting Yokosuka, Japan, she continued on to the United States, arriving at Bremerton, Wash., on 16 April. For the remainder of the year, Sacramento was active along the west coast. The beginning of 1974 brought with it preparations for another overseas deployment. Sacramento departed Seal Beach, Calif., in February, and headed for the Far East once again. As of June 1974, she was cruising the waters of the western Pacific in support of the 7th Fleet.

Sacramento earned 15 battle stars for service in the Vietnam War.


Add Your Name to the
AOE-1 Crew Roster