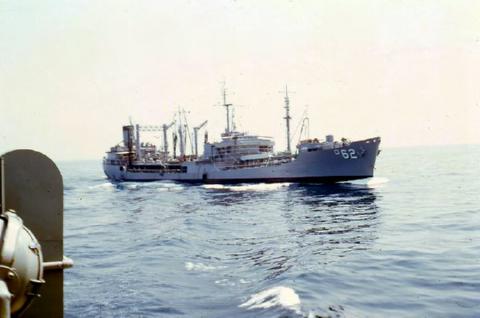 Final Disposition: Transferred to MARAD 1 May 1999

Taluga (AO-62) was laid down under a Maritime Commission contract (MC hull 728) on 23 December 1943 at Sparrows Point Md. by the Bethlehem Steel Co.; launched on 10 July 1944; sponsored by Mrs. Harvey Klemmer; delivered to the Navy at Norfolk on 25 August 1944; and commissioned there on that same day Comdr. Hans M. Mikkelsen in command.

The oiler left Norfolk on 6 October stopped at Aruba Netherlands West Indies from the 9th to the 11th; and transited the Panama Canal on the night of 13 and 14 October. She reached Pearl Harbor on the 26th and two days later continued on to the Marshalls. The oiler entered the Eniwetok lagoon on 26 November and exited on the 28th. On 10 December she reached Ulithi which served as her base of operations until the end of World War II.

For the next 11 months Taluga was in and out of Ulithi picking up oil and other supplies there and carrying them to units of the Pacific Fleet. For the most part her oil and aviation gasoline went to the ships of the Fast Carrier Task Force. During that time she supported the carrier strikes and landings on Luzon the Okinawa landings the strikes on Formosa and the final 3d Fleet sweep of the Japanese home islands in the summer of 1946. Between April and July of 1946 she spent much of her time in and around the anchorage at Kerama Retto just west of the southern end of Okinawa. There on 16 April she encountered her greatest excitement of the war. Shortly after dawn 10 kamikazes attacked her formation. One of them dove at the oiler strafed her deck and then made for her superstructure. The attacker careened off the ship's bridge and exploded through her forward well deck into a compartment adjacent to her tanks brimming with 300 000 gallons of aviation fuel. However only 12 men were injured and the oiler was soon back in action.

Soon after the final 3d Fleet sweep of Hokkaido and Kyushu Japan capitulated. Taluga entered Tokyo Bay on 26 August 11 days following the cessation of hostilities and took up duty as station oiler until early October. She then voyaged to Ulithi once more to refill her tanks and returned to Japan for duty as station oiler at Yokosuka. On 18 November she departed that port to support ships engaged in the occupation of China and Korea. She visited Tsingtao and Jinsen before returning to Yokosuka on 6 December. On 31 January 1946 the oiler put to sea to return to the United States. She arrived in San Pedro Calif. on 16 February and commenced a four-month yard period.

Following overhaul she sailed from San Pedro on 16 June for the Far East. For the next year Taluga hauled oil from the Persian Gulf ports of Bahrain and Ras Tanura to American bases in Japan and the Philippines. On 13 June 1947 she got underway from Yokosuka bound for home by the westward route. During that cruise the oiler visited Singapore and Bahrain before transiting the Suez Canal and stopping at Tangier. On 10 August she entered port at Norfolk. Three weeks later the oiler was back at sea and (after an overnight stop at Key West Fla.) headed for the Mediterranean. She loaded oil at Bahrain from 30 September until 2 October and following visits to Suez and Tangier returned to Norfolk on 28 October.

On 4 November she departed Hampton Roads once more for a cruise to the Middle East. She stopped at Ras Tanura from 30 November to 6 December then she continued eastward across the Indian Ocean and up through the South China Sea to Yokosuka Japan arriving there on the day after Christmas. On the last day of 1947 Taluga departed Yokosuka and set a course across the Pacific to Puget Sound Wash. She reached her destination on 13 January 1948 and began overhaul at the naval shipyard.

Taluga completed overhaul and departed Puget Sound on 19 April. For the next three years the oiler plied the oceans carrying oil to various American bases the world over. During that period she made short runs between ports on both coasts as well as long voyages to ports overseas. She served with the 6th Fleet in the Mediterranean on occasion and stopped frequently at the Persian Gulf ports Ras Tanura and Bahrain. The oiler called most frequently at San Diego San Pedro Long Beach and Seattle on the west coast; Norfolk on the east coast; as well as Galveston Houston Cristobal Guantanamo Bay and Aruba in the gulf and West Indies areas. On 12 May Taluga departed San Francisco and during the next month and one-half made two voyages between California and Alaska. On the first she made a circuit from Adak to Dutch Harbor to Kodiak before returning to San Francisco on 31 May. The second Alaskan voyage took her to Adak and Kodiak and was completed on 3 July. During the following months she shuttled between California ports before departing the west coast for the Far East on 30 July.

While Taluga was shuttling oil to bases throughout the world trouble was brewing in the Far East. On the morning of 26 June 1950 the North Korean People's Army invaded the Republic of Korea. American and other UN troops pushed the North Koreans back as far as the Yalu; and by winter the war appeared to be all but over. However the renewal of the war by the injection of communist Chinese troops required the United Nations to increase the flow of men and material to strengthen the sagging defenses. By the summer of 1951 Taluga was on her way again to join in another Asian war.

She departed Long Beach late in July stopped at Midway and Kwajalein and reached Sasebo Japan on 23 August. The oiler remained there for a month then headed for the combat zone on 22 September. Operating from Sasebo at the southwestern tip of Kyushu Taluga supported the blockade and siege of Wonsan and Songjin almost until the end of hostilities. She ranged up and down the eastern coast of Korea supplying oil and aviation fuel to the warships conducting operations along the coast. From March to September of 1952 she returned to the west coast and conducted operations between San Diego and Long Beach. She returned to Korean waters in October and after almost three months of operations in support of UN naval forces moved south to Taiwan where she visited Keelung and Kaohsiung and supported the Taiwan Strait Patrol.

In April 1953 Taluga sailed from Yokosuka via Pearl Harbor and arrived in San Pedro Calif. early in May. She operated along the west coast visiting San Diego and Long Beach until mid-August. On the 17th she got underway from Long Beach on the first peacetime deployment with the 7th Fleet in a series which lasted until the escalation of the Vietnam War brought the return of a substantial American presence back to the Asian continent.

Interspersed among the routine operations of those deployments were several operations of note; ones which might have presaged the increasing American involvement in Southeast Asia. During the winter of 1954 and 1956 the oiler participated in the evacuation of Chinese Nationalists from the Tachen Islands located just off the mainland. In January 1956 she took station off Henriette Passe near Haiphong to fuel the transport and relief supply ships evacuating refugees from strife-torn North Vietnam during the latter stages of Operation "Passage to Freedom " instituted in the wake of the Geneva agreements which followed the French defeat at Dien Bien Phu.

Soon thereafter Taluga resumed a series of deployments with the 7th Fleet for another 10 years. In 1966 the United States began expanding its direct participation in the war in Vietnam. Taluga's remaining deployments therefore were wartime deployments in or near a combat zone. During the ensuing six years Taluga deployed to the western Pacific six times. On each occasion she saw service in the war zone along the Vietnamese coast replenishing units of the 7th Fleet operating off the coast. She fueled the larger units as they supported the large carriers conducting strikes inland and she offered support to the smaller units engaged in Operation "Market Time " the interdiction of North Vietnamese coastal logistics and infiltration. Only once did she depart from her schedule of western Pacific deployments alternated with west coast operations and yard overhauls. That occasion came at the end of her 1970 deployment when she sailed south of the equator to Australia and New Zealand where she joined in LONGEX 70 the New Zealand annual maritime exercise.

Taluga completed her final deployment as a commissioned Navy ship at Long Beach on 13 November 1971. She conducted operations along the coast for another six months. On 4 May 1972 the oiler was decommissioned and turned over to the Military Sealift Command to participate in a pilot program designed to test the feasibility of reducing the number of Navy men serving in oilers. The operation named "Charger Log II " was an unqualified success. For the next three and one-half years her crew (made up of 106 civilians and 16 military men) maneuvered her through 876 underway replenishments in support of the 7th Fleet in the Far East. In late February 1976 she cleared the western Pacific for Oakland Calif. where she was placed in a ready-reserve status incident to overhaul. USNS Taluga completed overhaul in October 1976 and was then reactivated as a fleet support ship assigned to the 3d Fleet in the eastern Pacific. She served in that capacity into October 1979.

Taluga earned four battle stars during World War II four more during the Korean War and 12 for the Vietnam War.


Add Your Name to the
AO-62 Crew Roster