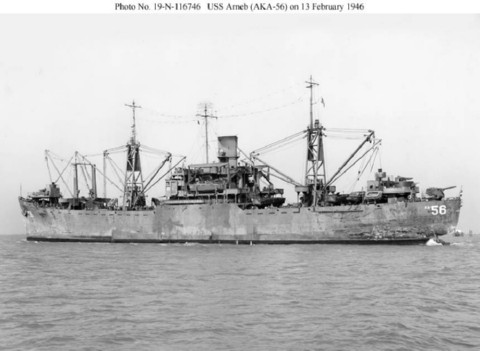 The USS ARNEB (AKA-56) deployment history and significant events of her service career follow:

Arneb (AKA-56) was laid down under a Maritime Commission contract (MC hull 1159) as Mischief by the Moore Drydock Co. at Oakland Calif. launched on 6 July 1943; sponsored by Mrs. Carol J. Palmer the daughter of a plant engineer; acquired by the Navy on 16 November and towed to Portland Oreg. where she was converted to an attack cargo ship by the Willamette Iron and Steel Co. and commissioned on 28 April 1944 Comdr. Howard R. Shaw in command.

Outfitted and loaded with stores for her first cruise by 10 May 1944 the attack cargo ship steamed to San Diego for shakedown training which was made unexpectedly interesting by her rescue of the three-man crew of a Navy Grumman TBF that had had to "ditc h". During June and July the ship practiced amphibious maneuvers using Army troops to make landings on San Clemente Island.

On 22 July Arneb sailed for the Hawaiian Islands and arrived at Pearl Harbor on 30 July. After debarking passengers the ship continued on to Guadalcanal for training. On 29 August the ship got underway with three transport divisions to rehearse landings for the invasion of the Palau Islands. On 8 September she sortied with Transport Division (TransDiv) 32 and headed for Angaur Island.

The cargo ship arrived on 17 September and lowered all of her boats off the west side of the island to feign landings in that quarter in an effort to divert Japanese defensive forces. The next day she actually landed troops and equipment of the 306th Eng ineers. Arneb remained in the Palaus until 23 September when she began carrying cargo and troops to Ulithi Hollandia and the Admiralty Islands.

At Manus she fueled and loaded supplies for training and rehearsal exercises for her next operation the liberation of the Philippines. She got underway on 12 October arrived off Leyte on the 20th and despite enemy shelling immediately began discharg ing her cargo and troops. Arneb next steamed to Guam to take on more cargo and troops for delivery at Leyte on 23 and 24 November.

Following her second voyage to Leyte the ship steamed to Hollandia to onload provisions cargo and personnel as well as to receive minor repairs. Arneb departed Hollandia on 27 December to participate in the invasion of Luzon anchoring in Lingay en Gulf on 9 January 1945. Since she was not carrying high priority cargo her boats helped transports in landing troops and cargo on D-day before they began unloading her own cargo on the following day. Although enemy air and small craft activity was int ense Arneb only lost one LCVP. She returned to Leyte on 15 January and ferried troops and supplies to Luzon for the assault on the area around La Paz on the 29th. During the next few weeks the vessel took on fuel cargo and other supplies in Leyte Gulf in preparation for her next major task the invasion of the Ryukyus.

On 27 March Arneb left Leyte Gulf arrived off Okinawa on 1 April and unloaded supplies despite enemy air attacks. She retired to Guam and was ordered to proceed on 10 April via Pearl Harbor to the United States. The ship arrived in San Pedro on 3 May and was seven a 15-day availability. Then after loading ammunition and other supplies she sailed for Pearl Harbor on 8 June. She returned to the west coast before the end of the month and moved into drydock at the Moore Dry Dock Co. On 20 July the cargo ship was once again headed for the Hawaiian Islands on the first of two voyages made before the end of August. During the ship's second run to Oahu Japan capitulated ending the fighting in the Pacific.

While in Pearl Harbor on 28 August Arneb received orders to load cargo and sail for the China coast to support the occupation forces. She ferried cargo and troops between Okinawa and China until 26 October when she headed for San Francisco. Diver ted to Seattle en route she arrived there on 13 November 1945. The ship was then assigned to the Naval Transport Service and made cargo runs between the west coast and the Far East until December 1947.

Placed in reserve at the Philadelphia Naval Shipyard on 16 March 1948 Arneb was modified to prepare her for polar operations. Equipped to become Rear Admiral Richard E. Byrd's flagship for a planned Antarctic cruise she was recommissioned on 19 M arch 1949. Following shakedown training out of Guantanamo Bay in April and May Arneb cruised in the North Atlantic from June to October to test the effectiveness of the cold weather equipment installed. After her return to Norfolk on 1 November t he ship trained in Chesapeake Bay.

Arneb needed to supplement the 6th Fleet in the Mediterranean in early 1950 returned to the east coast in May and underwent a three-month availability. She resumed normal training and support services for the Atlantic Fleet when the Korean War c ompelled postponement of the Antarctic expedition. Nevertheless the ship utilized her cold weather gear from March to December 1951 when she rendered logistic support to naval activities in England and North Africa including an amphibious training opera tion in Greenland.

Until March 1955 Arneb cruised primarily in the warm waters of the West Indies. From January to April 1952 the transport ferried cargo between islands in the West Indies. After a yard overhaul she participated in the lengthy large-scale NATO Op eration "Mainbrace" in the North Atlantic and Mediterranean. After her return to the east coast in February 1953 Arneb made six cruises to the West Indies before beginning preparations for an extended operation at Antarctica.

As a preliminary trial before her cruise southward Arneb participated in an operation in waters north of the Arctic Circle along the east coast of Baffin Island in August and September and then returned to Norfolk for final outfitting. On 14 Novem ber Arneb got underway as flagship of Operation "Deep Freeze I" that would allow her to claim the distinction of crossing both the Arctic and Antarctic Circles in the course of one year. She transited the Panama Canal on 20 November stopped at New Zealand and Franklin Island before arriving at Kainan Bay and McMurdo Sound where she stayed from 27 December 1955 to 30 January 1956. She returned to the United States via the Indian Ocean the Mediterranean Sea and the Atlantic Ocean completing her circumnavigation of the globe upon her arrival at Norfolk on 5 May 1956.

After undergoing an overhaul from May to August and refresher training at Guantanamo Bay Arneb was prepared for Operation "Deep Freeze II." She departed Norfolk in November stopped at Wellington New Zealand; entered the ice field on 16 December; and rendezvoused with the Coast Guard icebreaker Northwind (WAGB-282). Arneb experienced no difficulty in following the icebreaker during the first day of movement through the frozen sea; but on the 18th a quarter-inch crack-apparently caus ed by contact with ice during the previous two days appeared in her hull running some 31 inches above and below the waterline. Arneb's men repaired the damage enabling the ship to make slow but steady progress toward McMurdo Sound where the ships arrived on Christmas Eve.

Upon completion of their work there the two ships returned to Cape Hallett where Arneb moored to the ice while Northwind proceeded into Moubray Bay to clear an unloading site. On the last day of 1956 the ice pack into which Arneb w as nosed began to move and soon surrounded the ship with solid ice pressing against her hull. The framing on both sides of the ship began to buckle rivets popped seams split and beams ripped. Frigid water and ice began flooding into several cargo holds at a combined rate of 1200 gallons per minute. Damage control parties worked doggedly to contain the inrush of water but the men were only able to stay in the water for a few minutes at a time. Nevertheless by using mattresses steel plates and shoring timbers they managed to reduce the flow of water until the pumps cou ld lower the water level.

On 3 January 1957 the ice pack had loosened; and enabled Northwind to lead the battered Arneb into port. After unloading the cargo the crew repaired the cracks and split seams by listing the ship alternately to port and to starboard. Altho ugh having suffered a bent rudder post and a broken propeller blade Arneb was able to continue the operation.

No further mishaps occurred until 30 January when Arneb the icebreaker Glacier (AGB-4) and USNS Greenville Victory (T-AK-237) attempted to push through the icepack off Knox Coast. A large chunk of ice broke off and brushed Arneb's port side ripping a gash 12 feet long and one-half inch wide and once again flooding the holds as well as buckling plates popping rivets and opening seams. The experienced damage control parties used the same techniques to patch the new wo unds in her hull. The ships then got underway again with Glacier towing Arneb. Early the next morning they arrived at Knox Coast and once again the damage was repaired.

Arneb left the ice fields on 17 February and steamed to Sydney Australia without incident. There she went into dry-dock and after minimum repairs got underway on 28 February 1957 for the continental United States.

In spite of her troubles with fee damage Arneb made five more cruises to Antarctica to resupply the research stations and to transport hundreds of scientists involved in research on the frozen continent. During "Deep Freeze 61" she even delivered the foundation of a nuclear power plant to McMurdo Sound. Following "Deep Freeze 63 " Arneb was modified to enable her to return to normal duty with the Amphibious Force of the Atlantic Fleet. She underwent intensive training in amphibious operatio ns through participation in major Caribbean exercises. In 1965 she transported much-needed supplies to American forces operating in the Caribbean during the crisis in the Dominican Republic.

Arneb began a routine of operations in Atlantic and Caribbean waters and practiced with Navy and Marine Corps personnel in actual landings at Onslow Beach N.C. and Vieques Island Puerto Rico. During one such exercise "LANTFLEX 66 " 94 Atlantic Fleet ships took part in a three-week opposed approach landing and departure from Vieques under the surveillance of a Soviet intelligence-gathering trawler.

Between 8 and 22 February 1967 Arneb was in drydock at the Bethlehem Steel Corp. in Baltimore. She then moved to the Berkeley yards of the Norfolk Shipbuilding and Drydock Corp. for the remainder of her overhaul. With the overhaul completed and f ollowing refresher training during the summer of 1967 Arneb resumed her standard operating schedule of local Atlantic coast operations.

Arneb deployed to the Mediterranean in January 1968 and spent five months there as part of the 6th Fleet's Amphibious Ready Force. In August 1968 the cargo ship became the first amphibious ship and the first AKA qualified for spacecraft recovery d uty and she was on station as the secondary recovery vehicle for the Apollo 7 flight in October. On 1 January 1969 Arneb was reclassified LKA-56.

Arneb made three more Mediterranean cruises in 1969 and 1970 and participated in numerous Caribbean exercises before the Navy decided to end her naval service. Rather than inactivate and preserve the worn old ship the Board of Inspection and Surve y for the Atlantic Fleet recommended that Arneb be disposed of by sale. She was decommissioned at Norfolk on 12 August 1971 and her name was struck from the Navy list the following day. She was sold on 1 March 1973 to Andy International Inc. of Ho uston Texas and scrapped.

Arneb received four battle stars for her World War II service and a Meritorious Unit Commendation for the recovery mission for Apollo 7.


Add Your Name to the
AKA-56 Crew Roster