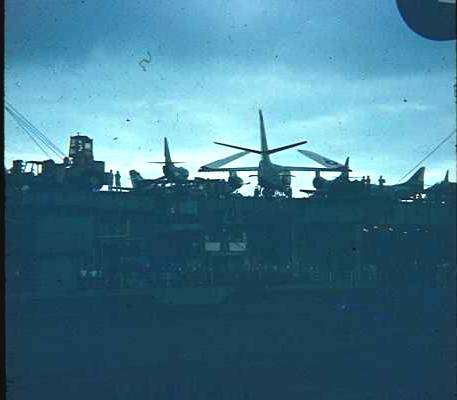 
The first Shasta (AE-6), an ammunition ship, was laid down under Maritime Commission contract (MC hull 125) on 12 August 1940 by the Tampa Shipbuilding Company, Tampa, Fla., initially as a C2 type cargo ship, the was acquired by the Navy on 16 April 1941 and launched on 9 July 1941; sponsored by Mrs. Spessard L. Holland; and commissioned on 20 January 1942, Capt. Francis A. Smith in command.

On 19 November 1942, Shasta departed Alameda, Calif., for Noumea, New Caledonia, on the first of her 10 wartime transpacific voyages. At the western end of each voyage, she moved from island to island replenishing the ammunition supplies of the Battle Fleet. With one exception, a deployment to Adak, Alaska, in support of the Attu and Kiska operations, Shasta's activities centered around the campaigns in the western Pacific. Her cargo supported the campaigns against the Gilberts, the Marianas, the Palaus, and the Philippines.

The highlights of Shasta's wartime career came in 1945. In February, she participated in the first successful underway ammunition replenishment. Later, while re-supplying the warships supporting the assault on Iwo Jima, she came under the fire of Japanese shore batteries. Her most harrowing experience occurred on 5 June when she was battered by the force 14 winds of a typhoon off the southeastern coast of Okinawa. Though her cargo had shifted and much of it had been damaged, Shasta still managed a successful rearming rendezvous before sailing for Leyte Gulf in the Philippines.

Her cargo operations complete, Shasta departed Leyte Gulf and joined TG 30.8 on 17 July 1945. After a short replenishment cruise, she returned to Leyte Gulf for more cargo. The end of the war found Shasta taking on cargo from Victory ships. She remained at Leyte Gulf until 25 October, at which time she sailed for Puget Sound Naval Shipyard via Eniwetok Atoll. Following inactivation overhaul, she was decommissioned at San Diego on 10 August 1946.

After almost six years of inactivity in the Pacific Reserve Fleet, Shasta was recommdssioned on 15 July 1953. Under the command of Capt. Peter N. Gaciglio, she departed San Diego on 26 November 1953 and joined the Atlantic Service Fleet at Norfolk on 12 November. At the completion of modernization overhaul at Norfolk and underway replenishment training off Newport, R.I., Shasta sailed on 7 January for her first Mediterranean deployment. For the next 11 years, she alternated between cruises with the 6th Fleet and Atlantic seaboard operations. She provided ammunition supply support to the 6th Fleet during the Jordanian crisis of May 1957 and the Lebanese crisis of August 1958.

During her assignments to the continental United States, Shasta participated in several special projects. She acted as a target ship for nuclear submarines, tested instruments on a dummy Polaris missile attached to her keel, and took part in NATO exercises. In June 1959, Shasta helped test a recently developed torpedo counter-measure known as Project Phoenix. On 14 September 1966, Shasta steamed out of Norfolk on a final visit to the Far East. She transited the Panama Canal on 20 September, called briefly at Pearl Harbor, and arrived at Subic Bay in the Philippines on 26 October. She remained in the Far East, either at Subic Bay or on Yankee Station, until 22 April 1967. On that day, she started her return voyage to Norfolk. Arriving at Norfolk on 8 June, Shasta completed her only circumnavigation of the globe. During this voyage, she transited the Suez Canal and stopped at Valleta, Malta; and Barcelona, Spain.

Following overhaul, Shasta weighed anchor for what was to be her final deployment. En route to Rota, Spain, and assignment with the 6th Fleet, she was diverted to assist in the unsuccessful search for nuclear submarine, Scorpion (SSN-599), which was lost with all hands off the Azores. Main engine difficulties caused Shasta to cut short her projected six-month deployment and return to Norfolk for major repairs. She was placed in a reduced operating status until 1 July 1969, when her name was struck from the Navy list. On 24 March 1970, Shasta was sold to Mr. Isaac Valera of Madrid for scrapping by the Spanish company, Revalorizacionde Materials, S.A.


Add Your Name to the
AE-6 Crew Roster