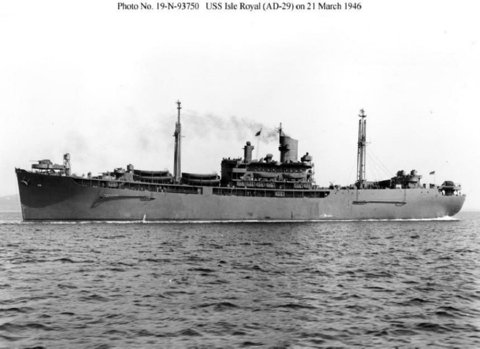 
Isle Royale (AD-29) was launched by Todd Pacific Shipyards, Inc., Seattle, Wash., 19 September 1945; sponsored, by Mrs. Greer A. Duncan; and delivered to the Navy 2 July 1946 for layup in the San Diego Reserve Fleet.

During her period of inactivation, Isle Royale served as headquarters ship for the San Diego Subgroup, Pacific Reserve Fleet. She was designated to replace Hamul in the active fleet, and commissioned at Long Beach 9 June 1962, taking Hamul's officers and men as that ship decommissioned. After shakedown Isle Royale moved to Long Beach to begin her services to Pacific Fleet destroyers, supplying them with parts and vital repair facilities.

The tender sailed for Pearl Harbor 8 February 1963 and for the next seven months served the destroyers roaming the Pacific on their vital peace-keeping mission. She re; turned to Long Beach from this deployment 11 September 1963, and conducted training operations in California waters until June 1964. The ship then got underway again for Pearl Harbor, where she operated until 30 October. She returned to Long Beach 5 November where she operated until departing 3 August 1965 for a scheduled 6-month mid-Pacific cruise. However, upon arriving Pearl Harbor, she received orders to proceed on to the Philippines where she tended ships of the 7th Fleet fighting in Vietnam.

Isle Royale returned to Long Beach 5 March 1966 and operated along the West Coast until sailing again for the Far East 16 September. She remained in the Orient operating primarily out of Subic Bay tending the destroyers of the 7th Fleet until her return to Long Beach 12 April 1967. Thereafter Isle Royale operated in waters off southern California preparing for future action.


Add Your Name to the
AD-29 Crew Roster