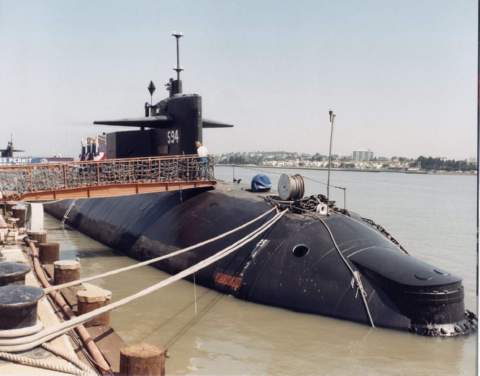 She spent 5 weeks of trials in the Puget Sound area, and then 3 weeks at Mare Island for checkout of the SUBROC missile system. During late summer and early fall, Permit underwent shakedown in the San Diego area. After final acceptance trials in January 1963, she participated in a thorough evaluation of the SUBROC missile, and on 28 March, became the first submarine to successfully fire one. During 1964 and 1965 Permit engaged in more testing and training of an advanced nature.

Permit underwent an overhaul at Mare Island during the winter of 1966. From May to July she deployed to WestPac, and after a short stop at Pearl Harbor, returned to San Diego 13 August. She spent the remainder of the year operating in local waters.

The submarine underwent overhaul at Mare Island in 1967. During this period, her homeport was changed to Vallejo. By late November Permit was ready for trials in Puget Sound, Wash., and a return to San Diego 12 December. She operated off San Diego until 22 April, when she departed for Special Operations in the Pacific, which lasted until 26 June. From 24 July to 1 October she was engaged in another special assignment. Permit then resumed local operations off San Diego, and into 1970 is still actively engaged with the Pacific Fleet.


Add Your Name to the
SSN-594 Crew Roster