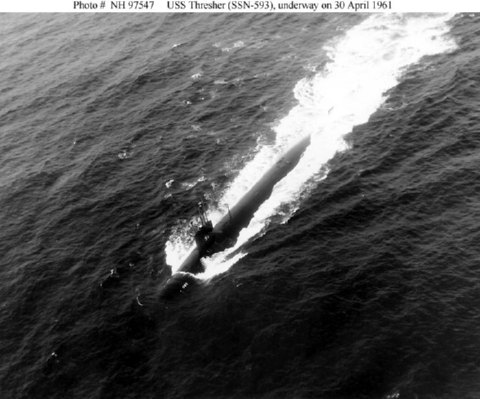 In Commission 1961 to Present

Following trials the nuclear attack submarine took part in Nuclear submarine Exercise (NUSUBEX) 3-61 off the northeastern coast of the United States from 18 to 24 September.

On 18 October; the submarine headed south along the east coast. After calling at San Juan Puerto Rico she conducted further trials and test-fired her torpedo system before returning to Portsmouth on 29 November. The ship remained in port through the end of the year and spent the first two months of 1962 evaluating her sonar system and her Submarine Rocket (SUBROC) system. In March the submarine participated in NUSUBEX 2-62 an exercise designed to improve the tactical capabilities of nuclear submarines and in antisubmarine warfare training with Task Group ALPHA.

Off Charleston the ship undertook operations observed by the Naval Antisubmarine Warfare Council before she returned briefly to New England waters from whence she proceeded to Florida for SUBROC tests. However while mooring at Port Canaveral the subma rine was accidentally struck by a tug which damaged one of her ballast tanks. After repairs at Groton Conn. by the Electric Boat Company the ship returned south for more tests and trials off Key West. Thresher then returned northward and remaine d in dockyard hands through the early spring of 1963.

In company with Skylark (ASR-20) Thresher put to sea on 10 April 1963 for deep-diving exercises. In addition to her 16 officers and 96 enlisted men the submarine carried 17 civilian technicians to observe her performance during the deep-di ving tests.

Fifteen minutes after reaching her assigned test depth the submarine communicated with Skylark by underwater telephone apprising the submarine rescue ship of difficulties. Garbled transmissions indicated that -far below the surface-things were go ing wrong. Suddenly listeners in Skylark heard a noise "like air rushing into an air tank"-then silence.

Efforts to reestablish eontaet with Thresher failed and a search group was formed in an attempt to locate the submarine. Rescue ship Recovery (ASR-43) subsequently recovered bits of debris including gloves and bits of internal insulation. Photographs taken by bathyseaph Trieste proved that the submarine had broken up taking all hands on board to their deaths in 1 400 fathoms of water some 220 miles east of Boston.


Add Your Name to the
SSN-593 Crew Roster