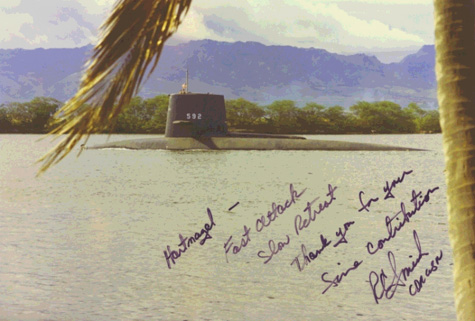 
The second Snook (SSN-592) was laid down by the Ingalls Shipbuilding Corp., Pascagoula, Miss., on 7 April 1958; launched on 31 October 1960; sponsored by Mrs. George L. Walling, mother of Comdr. J. F. Walling who was commanding officer of the first Snook (SS-279) when she was lost in action in World War II; and commissioned on 24 October 1961, Comdr. Howard Bucknell III in command.

Following shakedown in the Puget Sound area, Snook departed San Diego on 23 June 1962 to deploy as a unit of the 7th Fleet in the western Pacific, returning home on 21 December. On 1 February 1963, the submarine entered Mare Island Naval Shipyard, Vallejo, Calif., for extensive improvements of her hull. After leaving Mare Island on 23 August, Snook operated in the San Diego area until deploying to the western Pacific to join the 7th Fleet, following which she again entered Mare Island Naval Shipyard for three and one-half months of repairs and the installation of new electronic equipment.

After participating in local operations in the San Diego area, Snook departed on 19 March 1965 for a six-month deployment in the western Pacific. Highlights of this tour were calls at Sasebo, Japan, and Chinhae, Korea. After return to San Diego, Snook spent the next six months undergoing sound trials and drydocking; and, on 16 April 1966, headed for the western Pacific. During this deployment, she visited Okinawa; Yokosuka and Sasebo, Japan; Chinhae, Korea; and Subic Bay, Philippines; before returning to San Diego on 19 November.

On 19 March 1967, Snook got underway from San Diego for Puget Sound Naval Shipyard, Bremerton, Wash., and a 14-month overhaul and refueling. On 30 June 1968, the submarine returned to San Diego and participated in local operations, including the sinking as a target of Archerfish (AGSS-311).

Snook spent the first four months of 1969 participating in various antisubmarine warfare exercises and preparing for overseas deployment. In May, she once again departed for the western Pacific for a deployment that lasted seven months, returning home on 22 December. Late in January 1970, Snook participated in exercise. Uptide with other units of the 1st Fleet. From June through September, she was drydocked at Mare Island Naval Shipyard. Following return to San Diego, the submarine sailed for a six-month deployment with the 7th Fleet, returning to San Diego on 12 July 1971. Snook spent the remainder of the year in port and in operations off the California coast.

Operating locally in the San Diego area through the first four months of 1972, Snook got underway on 13 May for a two-month tour supporting United States forces in Vietnam and visiting Kaohsiung, Taiwan. Following drydocking at Puget Sound Naval Shipyard, Snook got underway on 10 January 1973 for her eighth deployment with the 7th Fleet. During this deployment, Snook visited Pearl Harbor, Hawaii, and Guam in the Marianas.

She returned to San Diego on 16 June and began a four-week, post-deployment leave and upkeep period, followed by another four weeks engaged in sonar evaluation tests. On 26 November, following her participation in COMTUEX 12-73, Snook entered Mare Island Naval Shipyard to begin a refueling overhaul. As of 31 July 1974, she remains at Mare Island completing overhaul.


Add Your Name to the
SSN-592 Crew Roster