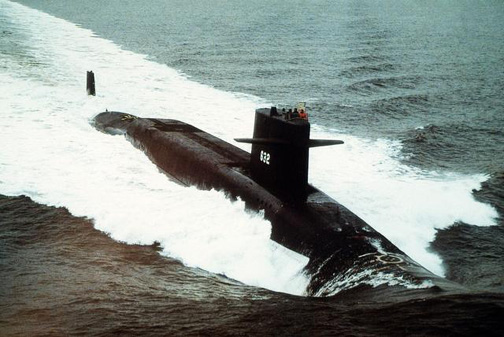 During the fall of 1964, the fleet ballistic missile submarine completed two shakedown cruises-one for each crew-and a period of antisubmarine warfare (ASW) training between the two. On 22 December, the submarine's gold crew fired her first Polaris missile on the Atlantic missile range before returning to Newport News for Christmas. She changed crews again at the beginning of the new year, 1965, and returned to the missile range off Cape Canaveral (then called Cape Kennedy) where the blue crew fired its first missile. In February, after completing all initial training operations, she returned to Newport News.

In March, Von Steuben headed for her first duty assignment. The submarine joined Submarine Squadron (SubRon) 18 at Charleston, S.C., her new base of operations, and immediately began conducting classified deterrent patrols. Her primary mission was and is to deter aggression by providing a highly-mobile launch platform for her nuclear warhead-bearing Polaris missiles. Since her security and mission would be impaired should any potential enemy learn of her patrol routes and activities, that information is highly classified and cannot be recounted here. However, she has conducted more than 30 such patrols since her commissioning, at the rate of four or five per year.

At the end of her 11th patrol early in 1968, Von Steuben was reassigned to SubRon 16 and operated out of Rota, Spain, until the middle of 1969. During that assignment, she visited Groton, Conn., in the summer of 1968 for repairs at the Electric Boat Division of General Dynamics Corp., after which she resumed deterrent patrols out of Rota. In November 1970, she visited Groton once again, this time near the end of a 16-month overhaul during which she was modified to carry the newly developed Poseidon C-3 missile. She conducted post-conversion shakedown during the early months of 1971 and fired her first and second Poseidon missiles in February and March, respectively. She returned to Charleston and resumed deterrent patrols in May 1971. Since that time, she continued to make patrols out of Charleston and, recently, also from the submarine base at Holy Loch in Scotland.


Add Your Name to the
SSBN-632 Crew Roster