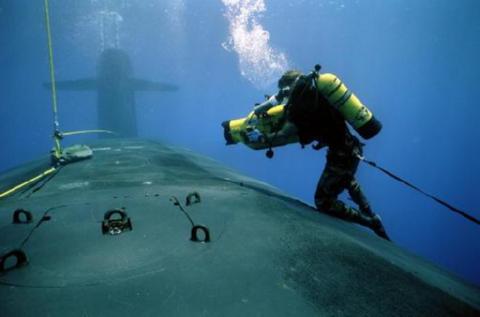 
Woodrow Wilson (SSBN-624) was laid down on 16 September 1961 at Vallejo, Calif., by the Mare Island Naval Shipyard; launched on 22 February 1963; sponsored by Miss Eleanor A. Sayre, the granddaughter of President Wilson; and commissioned on 27 December 1963, Comdr. C. N. Mitchell and Comdr. W. N. Dietzen in command of the Blue and Gold crews, respectively.

Woodrow Wilson departed Vallejo, Calif., on 9 January 1964, bound for the east coast on a route which would take her through the Panama Canal. After stopping briefly at San Diego, the submarine proceeded on to Panama, arriving on 19 January at the west coast end of the canal. Violent anti-American demonstrations and riots over a recent flag-displaying incident had resulted in an extremely tense atmosphere. As a result, the submarine transited the canal in a record seven hours and ten minutes while combat-ready marines and soldiers guarded the locks.

Making port at Charleston, S.C., on 5 February, the Woodrow Wilson conducted shakedown off the lower eastern seaboard into March and underwent her post-shakedown availability into April. She put to sea at the end of May upon the conclusion of these repairs and alterations and commenced her first deterrent patrol out of Charleston in June.

Woodrow Wilson subsequently operated in the Atlantic until the autumn of 1969 conducting her patrols from forward bases at Rota, Spain, and Holy Loch, Scotland. She was then transferred to the Pacific and arrived at Pearl Harbor on 19 November, via Charleston and the Panama Canal. The fleet ballistic missile submarine continued toward the western Pacific to be based at Guam. She conducted deterrent patrols from Apra Harbor through 1972. In that year, she shifted back to the Atlantic and served with the Atlantic Fleet into 1978. Between 1964 and 1977, the ship performed 37 deterrent patrols


Add Your Name to the
SSBN-624 Crew Roster