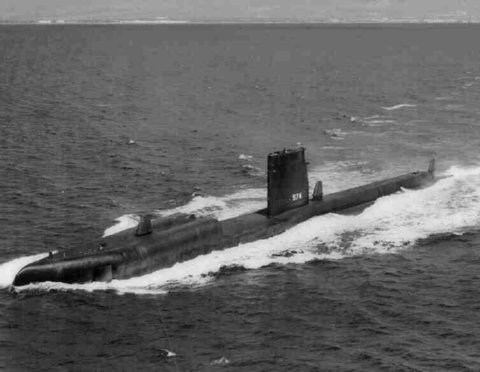 
The second Grayback (SSG-574) was launched by the Mare Island Navy Yard, Vallejo, Calif., 2 July 1957; sponsored by Mrs. John A. Moore, widow of the last skipper of the first Grayback; and commissioned at Mare Island 7 March 1958, Lt Comdr. Hugh G. Nott in command.

The first of the Navy's guided missile submarines to carry the Regulus II sea-to-surface missiles, Grayback conducted tests and shakedown along the West Coast. While operating out of Port Hueneme, Calif., in September she carried out the first successful launching of a Regulus II missile from a submarine, which pointed the way to a revolutionary advance in the power of navies to attack land bases. Departing San Diego 30 October, Grayback arrived Pearl Harbor 8 November for a month of exercises and maneuvers before returning to Mare Island for her "10,000-mile checkup."

On 9 February 1959, Grayback departed Mare Island to make Pearl Harbor her permanent home base, reaching Hawaii 7 March via Port Hueneme, and Long Beach, Calif., and Mazatlan, Mexico. After a series of exercises there, she cruised to Dutch Harbor, Unmak and Sequam Islands, and Kodiak, Alaska, for further missile exercises from 3 to 31 July. This was followed by the first of her nine deterrent missile strike missions to date, as from 21 September to 12 November she patrolled secretly through Pacific waters with a full load of missiles ready for retaliation 1000 miles inland in event of war. Grayback's first patrol terminated at Yokosuka, Japan, as did two others. She returned to Pearl Harbor 8 December.

On 22 February 1960, Grayback modified her missile launching system and simplified her complex electrical circuits. After this, she again took up deterrent missile strike missions. Over the next 2 1/2 years she completed seven missions for a total of nearly 18 months at sea, much of this time submerged. In addition to Yokosuka both Adak, Alaska and Pearl Harbor also served as termination points for these patrols. On her nine patrols she spent more than 20 months at sea and logged well over 130,000 miles on deterrent missile strike missions.

As more and more Polaris submarines became operational, they assumed the deterrent functions previously assigned to Grayback and her sister ships. She decommissioned at Mare Island 25 May 1964. At present she is being converted to a submarine troop transport and will serve the Navy as Grayback (APSS-574). Conversion is scheduled to be completed in December 1968.


Add Your Name to the
SS-574 Crew Roster