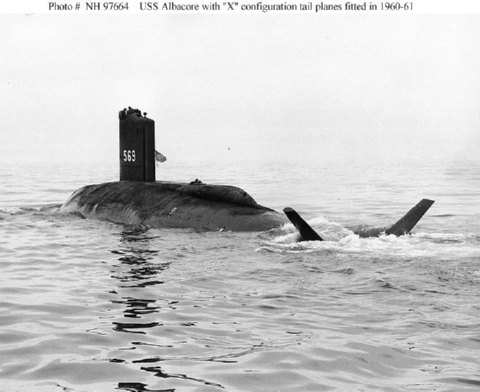 Final Disposition: Donated as a Museum and Memorial

Late in World War II a committee studied postwar uses of atomic energy and recommended the development of nuclear propulsion for ships.

Since nuclear power plants would operate without the oxygen supply needed by conventional machinery, and since techniques were available for converting carbon dioxide back to oxygen, the Navy's submarine designers turned their attention to vessels which could operate for long periods without breaking the surface. Veteran submariners visualized a new type of submarine in which surface performance characteristics would be completely subordinated to high submerged speed and agility. In 1949 a special committee began a series of hydrpdynamic studies which led to a program within the Bureau of Ships to determine what hull form would be best for submerged operation. The David Taylor Model Basin tested a series of proposed designs. The best two-one with a single propeller and the other with dual screws-were then tested in a wind tunnel at Langley Air Force Base, Va. The single-screw version was adopted, and construction of an experimental submarine to this design was authorized on 25 November 1950. This ship was classified as an auxiliary submarine (AGSS-569) and named Albacore.

The submarine departed Portsmouth on 12 October 1955 and sailed via Block Island, R.I., for Key West where she arrived on 19 October to commence antisubmarine warfare evaluation and to provide target services to the Operational Development Force's Surface Antisubmarine Development Detachment. On 4 November, Admiral Arleigh A. Burke, Chief of Naval Operations, embarked in Albacore for a brief demonstration cruise. On 19 November 1955, Albacore sailed for a rendezvous point off the Bahama Islands where she conducted special operations until 24 November and then returned to Portsmouth.

Operation with her new stern configuration started in April 1956 and continued until late in the year. In May Albacore visited New York City and participated in the television production "Wide, Wide World," during which she submerged, with an underwater camera mounted on her forecastle, first live telecast of a submarine while diving.

Following preliminary acceptance trials, the new submarine departed Portsmouth on 8 April 1954 for shakedown training. She began the first cycle of a career in which she experimented extensively with a given configuration and then returned to Portsmouth for extensive modifications so that she might evaluate different design concepts. In this way, she helped the Navy to develop better hull configurations for future submarine classes. On this initial cruise, she operated out of New London before sailing for Key West, Fla., to conduct operations out of that port and in Cuban waters. She returned to Portsmouth on 3 July for more than a year of trials in cooperation with the David Taylor Model Basin. Throughout these operations, she underwent repairs and modification in an effort to eliminate technical problems.

In November 1956, Albacore reentered the shipyard for engine conversion. She departed New London, 11 March 1957, for operations out of San Juan, Puerto Rico, and Guantanamo Bay, Cuba. The submarine returned to Boston on 2 April 1957 and operated locally out of Boston and Portsmouth until entering the Portsmouth Naval Shipyard early in 1958 for an overhaul which lasted until June.

The ensuing tests emphasized sound reduction and included extensive evaluation of Aquaplas, a sound dampening plastic which had been applied to the ship's superstructure and tank interiors. In October 1958, her bow planes were removed to cut down still more on noise. The submarine ended the year with a fortnight's run to Halifax, Nova Scotia, and back to serve as a target ship for Canadian warships.

In 1959, a newly designed 14-foot propeller was installed and tested. Albacore sailed south late in May and, after operating in the British West Indies for two weeks, proceeded to Key West to serve as a target for the Surface Antisubmarine Development Detachment. After returning north, she spent much of the remainder of 1959 and most of 1960 undergoing widely varied tests for the David Taylor Model Basin. One of the more unusual consisted of evaluating a concave bow sonar dome.

On 21 November 1960, the ship entered the Portsmouth Naval Shipyard for a major overhaul and conversion in which she received: a new, experimental, "X"-shaped tail for increased control; 10 dive breaks around her hull; a new bow which included modified forward ballast tanks; new sonar systems; and a large auxiliary rudder in the after part of her sail. Following the completion of this work in August 1961, she operated along the east coast learning the effect of her new configuration and equipment upon her capabilities and performance.

In 1962, she received a newly developed DIMUS sonar system and, on 7 December of that year, work began on her fourth major conversion which included the installation of concentric contra rotating propellers, of a high-capacity silver-zinc battery, and of a larger main motor. New radio equipment, BQS and BQR sonars, an emergency recovery system, and a new main ballast tank blow system were also added. After the work was completed in March 1965, Albacore prepared for deployment to Florida waters to study the results of her changes. She returned to Portsmouth on 8 October and continued to evaluate her capabilities under the new configuration. On 1 August, she reentered the Portsmouth Naval Shipyard to replace the silver-zinc battery and to shorten the distance between the contra-rotating propellers-work which lasted into August 1967.

Standardization and machinery tests in the Gulf of Maine during September were followed by evaluation of towed sonar arrays off Port Everglades, Fla., in October and November. Then came acoustics trials in the Tongue of the Ocean, a deep channel in the Central Bahamas.

On New Year's Day 1968, the submarine returned to Portsmouth for a modification of her propulsion system which kept her in the navy yard until 19 April. Then, following a month of trials in the Gulf of Maine, she headed south for evaluation of her new MONOB I and AUTEC systems and of Fly-Around-Body (FAB), Phase I, equipment on Tongue of the Ocean. She returned to Portsmouth on 24 August for AUTEC deinstrumen-tation and installation of FAB Phase II equipment. Then, following evaluation of this new gear in the Gulf of Maine, Albacore returned to Portsmouth on 30 September and went into reduced operating status pending the results of further studies on the feasibility of using her thereafter for further research. Consequently, she remained for the most part inactive until 2 February 1970 when she began an overhaul m drydock and modifications to prepare her for Project SURPASS, a research and development project sponsored by the Naval Ship Research and Development Center at Carderock, Md. The ship left drydock on 16 April 1971, commenced sea trials on 22 July, and completed them on 29 August. Early in October, she operated off Provincetown, Mass., to calibrate her sonar and radar equipment.

However, after frequent diesel engine failures had caused repeated delays in her operations, her deployment in support of Project SURPASS was cancelled and preparations for her deactivation were begun. Albacore was decommissioned on 9 December 1972 and laid up at Philadelphia. Her name was struck from the Navy list on 1 May 1980, and she was towed back to Portsmouth late in April 1984. In 1985, she was dedicated as a memorial.

Albacore's service as an active experimental submersible for more than two decades steadily increased the Navy's knowledge of both theoretical and applied hydrodynamics which it used in designing faster, quieter, more maneuverable, and safer submarines. The Navy's effort to build hulls capable of optimum operation while submerged was wedded to its nuclear propulsion program in the submarine Skipjack (SSN-585) which was laid down in the spring of 1956; and these two concepts have complemented each other in the design of all of the Navy's subsequent submarines.


Add Your Name to the
SS-569 Crew Roster