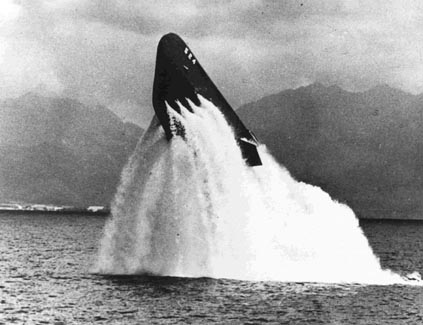 After sea trials, Pickerel departed New London, Conn. 10 August, and headed for Hawaii via East and Gulf coast ports, and the Panama Canal and arrived Pearl Harbor 28 September where she joined SubDiv 11.

From 16 March to 5 April 1950, Pickerel completed a 5,200 mile voyage from Hong Kong to Pearl Harbor in 21 days while completely submerged, probably the longest distance ever traveled by a submerged diesel-electric submarine. During her first deployment in the Western Pacific in 1950, Pickerel spent 4 months in the Korean War Zone, one of the first submarines to enter the Korean Conflict.

Returning to Pearl Harbor in the spring of 1951, Pickerel operated in the Hawaiian area undergoing tests of maximum capabilities, and conducting intensive training until she returned to the Far East in July 1953.

Upon returning to Hawaii early in 1954, Pickerel resumed services for our aircraft and surface anti-submarine forces there and, but for overhaul, continued this important duty until returning to the Western Pacific in June 1955. She returned to Hawaii 1 December.

Pickerel alternated North Pacific with WestPac duty through 1963 with the exception of a conversion period during 1962 for Guppy modernization.

Pickerel operated out of Pearl Harbor during 1964 until 28 December, when she departed enroute Yokosuka to begin a WestPac tour as a unit of the 7th Fleet. In the years that followed, she continued this pattern of alternating services in Hawaii with deployments in the Far East. In the fall of 1966 her duties in WestPac were broadened to include operations in the Vietnam combat zone on Yankee Station.

After a year in Hawaiian waters, Pickerel headed west once more on 16 January 1968. She visited various ports of the Orient before returning to Yankee Station 8 May. Following service in the Combat Zone, she reached Pearl Harbor via Japan 8 July. Her home port was changed to San Diego 1 August and she headed for the West Coast 22 August.

Into 1970 Pickerel continues in Pacific operations providing a vital service to the U.S. Navy.


Add Your Name to the
SS-524 Crew Roster