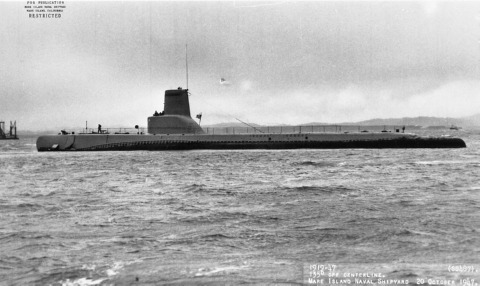 Completing her Caribbean shakedown in April 1946 Remora operated out of New London Conn. as a training submarine until January of 1947. Then transferred to the Pacific she transited the Panama Canal at midmonth and arrived at Mare Island Vallejo Calif. on 14 February to begin a GUPPY II conversion. Early in November she completed trials and on the 22d arrived at San Diego her new homeport.

For the next 2 years she remained in the eastern Pacific operating primarily off California but during the summer and early fall of 1948 ranged as far north as the Aleutians. On 1 May 1950 she headed west for her first deployment in the Far East. On 8 June she arrived at Sasebo and on the 11th she shifted to Yokosuka from which base she conducted ASW training exercises with units of Naval Forces Far East. Two weeks later the Korean war began.

A unit of TF 96 Naval Forces Japan Remora patrolled Soya Strait between Hokkaido and Sakhahn in late July and early August. Later in the month she headed back to San Diego. During the next 2 years she underwent overhaul provided services for the Line School at Monterey and conducted local training exercises. She returned to the western Pacific in early 1953. Arriving at Buckner Bay on 15 March she continued on to Japan in April and at midmonth rejoined TF 96. In June she was back in Okinawan waters for patrols and exercises after which she returned to Yokosuka. On 2 July she headed east reaching San Diego on 3 August.

After the fighting in Korea ended Remora remained based at San Diego and through the decade continued to alternate training exercises and patrols in the western Pacific with similar 1st Fleet operations off the west coast and in Hawaiian waters. She remained in the eastern Pacific during 1956 and 1958 but during the spring of the latter year was engaged in extended exercises off Alaska.

In November 1961 Remora was transferred from San Diego to Pearl Harbor. The following year she underwent a 7-month GUPPY III conversion which lengthened her hull by 15 feet and her conning tower by 5 feet. Then in 1963 she was employed to evaluate antisubmarine sonar in Hawaiian waters. In May of 1964 she resumed a schedule of annual 6-month WestPac deployments which she continued into 1969. In August 1969 Remora shifted home ports from Pearl Harbor to Charleston S.C. With the exception of one Mediterranean cruise from 16 February to 26 June 1970 she continued to operate out of Charleston along the Atlantic seaboard in the Caribbean and in the Gulf of Mexico until decommissioned 29 October 1973 at Charleston. On that date she was transferred to the Hellenic Navy and recommissioned as Katsonis (S-115).


Add Your Name to the
SS-487 Crew Roster