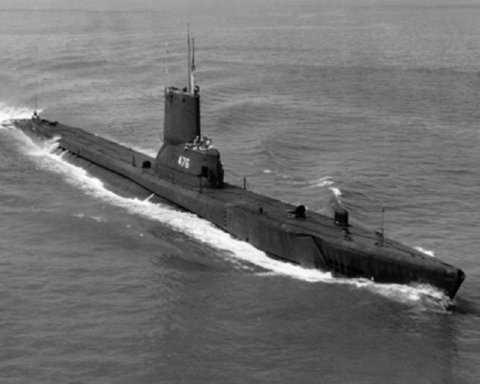 After shakedown and preliminary training off the Atlantic coast she departed New London 5 April 1945 and arrived at Pearl Harbor 21 May 1945 after intensive training at Key West and Balboa. Her first war patrol was off the east coast of Honshu Japan where her primary mission was to scout for the presence of defensive minefields guarding the Japanese home islands. On 10 July while on patrol in the Sea of Japan she intercepted two worthwhile targets a tanker and a minesweeper. The tanker and her two escorts escaped the spread of torpedoes fired at them but the minesweeper W-27 was splintered by three of Runner's torpedoes. Before departing station Runner received 16 downed aviators from Gabilan (SS-252) and Aspro (SS-309) for transfer to Guam where she arrived on 24 July.

Her second patrol began a week prior to the Japanese capitulation and by the time Runner arrived on station off the east coast of Honshu peace had come. Runner with 10 other U.S. submarines entered Tokyo Bay 31 August and represented the U.S. submarine service at the formal surrender ceremonies. SS-476 and her sister submarines departed Japan on 3 September arriving Pearl Harbor 12 September. She continued east until reaching New London Conn. on 6 October. A few weeks later in company with other vessels of Submarine Squadron 6 Runner proceeded south arriving for duty at Balboa C.Z. on 14 February 1946. For the next 3 years Runner was based at Panama and participated in annual fleet exercises in the Caribbean.

In June 1949 she was reassigned to Norfolk her base for the next 7 years. In the autumn of 1957 Runner participated in North Atlantic NATO exercises visiting ports in France and England. Homeported in San Juan P. R. from July 1958 to July 1959 she operated in the Caribbean as a Regulus missile guidance submarine.

Returning to Norfolk in July 1959 Runner operated with the fleet along the Atlantic coast for the next 3 years. She deployed to the Mediterranean from January to early May 1962 operating with United States and NATO units. The remainder of 1962 was taken up with local ASW exercises and overhaul.

Throughout 1963 and 1964 she engaged in various antisubmarine warfare exercises in the western Atlantic. The summer of 1964 was spent in the Great Lakes training Naval Reservists. After operating with the fleet in the spring of 1965 she entered Norfolk Naval Shipyard for overhaul. In 1966 operations included services for ASW exercises type training and participation in Exercise Springboard in the early spring. Runner deployed to the Mediterranean with the 6th Fleet from 8 July to 28 October 1966. School services for future submariners occupied most of 1967.

The year 1968 commenced with Runner providing services for UDT school at Little Creek Va. and ASW training off the east coast. On 4 April 1968 Runner departed on her last Mediterranean deployment. She returned to Norfolk 31 July have visited ports in Spain and Portugal and participating in NATO Exercise Dawn Patrol.

On 25 January 1969 Runner was decommissioned at the Boston Naval Shipyard and towed to the Great Lakes Naval Training Station where she was redesignated AGSS 476 and served as a Naval Reserve Training vessel until stricken from the Navy list 15 December 1971.


Add Your Name to the
SS-476 Crew Roster