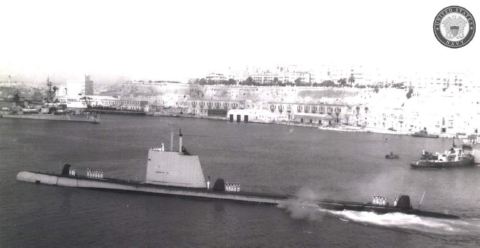 Completed on the last day of 1944, Torsk trained out of Portsmouth, Newport, and New London until 11 February, when she headed for Florida. On the 16th, the submarine arrived at Port Everglades where she provided services for antisubmarine research. She departed that Florida port on 20 February, transited the Panama Canal, and reached Hawaii on 23 March.

After a repair and training period, she got underway from Pearl Harbor for her first war patrol. Torsk paused briefly at Guam en route to an area off Kii Suido which she reached on 11 May and began lifeguard duty. Air contacts were few in this period, and the submarine found no opportunity to conduct rescue operations. Toward midnight on 11 May, she set course for her patrol area off the northeastern coast of Honshu. She arrived there on the 13th and, for two days, attempted to contact other members of the wolf pack, "Lewellen's Looters." On the 16th, she made rendezvous with Sandlance (SS-381) and Cero (SS-225). For more than a fortnight, their careful coverage of the east coast of Honshu turned up nothing more interesting than mines.

On 2 June, while patrolling between Honshu and Hokkaido, Torsk came upon a small coastal minelayer. The submarine fired six torpedoes-which the small vessel avoided by maneuvering-and then dove and rigged for depth charges which did not materialize. Torsk had another disappointing encounter on the 4th when, while patrolling off Kobe Saki, she fired four torpedoes at a 700-ton freighter without scoring. The following day, she set her course homeward, stopped at Midway on the llth, and returned to Pearl Harbor on the 16th.

After refitting and the installation of new equipment, the submarine got underway for her second war patrol on 17 July. She spent the first two days of August at Guam and set her course for the Sea of Japan.

She passed through the minefields of Tsushima Strait on 10 August and, on the morning of the llth, rescued seven Japanese merchant seamen who had survived the sinking of the Koue Mam some four days before. Early that afternoon, the submarine entered her patrol area and, on the following morning off Dogo Island, Torsk made a submerged periscope attack which sank a small coastal freighter.

On the 13th, she patrolled off Ando Saki and, after sighting a number of fishing boats during the morning, sighted another small freighter which she promptly sank. Later the same day, she made an unsuccessful attack on a cargo ship as it entered Wakasa Wan; then dodged through a 75-boat fishing fleet; and outdistanced the maru's escort.

Off Amarubi Saki on the morning of the 14th, Torsk sighted a medium cargo ship and took up the chase. A 745-ton "Kaibokan"-class patrol escort vessel accompanied the freighter to seaward, presenting the submarine with a tempting target. At 1035, as the freighter and her escort approached Kasumi Ko, Torsk launched one of the new experimental Mark 28 torpedoes at the escorting ship. Minutes later, the "fish" found its mark; an explosion bent the stern of the frigate up to a 30-desrree angle, and shortly thereafter the target sank. As the freighter entered the harbor half an hour later, Torsk attempted to sink her but was unsuccessful, possibly because the torpedoes struck undetected reefs near the mouth of the harbor.

Around noon, another frigate appeared, apparently a reinforcement which had been called in. Continuing her aggressive action, Torsk fired a Mark 28 torpedo at the frigate which had already detected the submarine's presence. Comdr. Lewellen then initiated deep submergence procedures and ordered the crew to rig for silent running. After a tense five minutes, she reached 400 feet and there she launched another torpedo, this time the new acoustic Mark 27. Almost immediately, a loud explosion announced that the first torpedo had found its mark, and a minute later a second explosion sounded, followed by strong breaking up noises. The secret new torpedoes had proven their worth in battle, and Torsk was credited, not only with two enemy warships, but also with sinking the last Japanese warship sunk in World War II. Held down by enemy planes and patrol vessels, the submarine remained submerged more than seven hours. Then, she surfaced and headed for the Noto peninsula.

On the 15th, following four highly successful days of aggressive patrolling, Torsk received word of the cessation of hostilities. She continued her patrol in the Sea of Japan, conducting visual and photo surveillance and destroying floating mines. On the 31st, what was thought to be a torpedo wake was sighted, an indicator that not everyone had heard the news of the war's ending.

The submarine set her course for the Marianas on 1 September, passed through Tsushima Straits on the 3d, and arrived at Guam on the 9th, successfully completing her second war patrol.

She departed the Marianas on the next day, .proceeded via Pearl Harbor and the Canal Zone, and arrived at New London in mid-October. For the next seven years, she operated out of that port serving as a training ship, participating in exercises and tests, and occasionally making naval reserve training cruises. In June 1949, she was assigned to Submarine Squadron 2; and, in the summer of 1950, she was deployed to the Mediterranean. The ship returned to New London in the fall for fleet exercises and, the following year, extended her operations into the Caribbean.

Early in 1952, she completed her conversion to a fleet-snorkel submarine and was deployed again to the Mediterranean that summer. Returning on 27 November, she continued operations out of New London ranging from Halifax to Havana as she trained prospective submarine personnel and laid exercise mine fields. In 1955, she was reassigned to Submarine Squadron 6 at Norfolk. There, her duties included services to aircraft and surface ships to help them hone their skills in antisubmarine warfare. She made frequent Caribbean voyages and participated in Operation "Springboard." In June 1959, she proceeded via the Saint Lawrence Seaway to the Great Lakes, visited various ports on Lake Ontario and Lake Michigan, then returned to the Norfolk operating area in mid-August.

In the early 1960's, she made Mediterranean deployments; joined Commonwealth countries in Exercise "New Broom X"; and continued her duties in training antisubmarine forces in the Atlantic. During the Cuban Crisis in the fall of 1962, she patrolled in support of the blockade of that Caribbean island.

On 4 March 1964, the veteran submarine was decommissioned and, following modifications at the Boston Navy Yard, was assigned to the Washington Navy Yard for use in training reserves. Torsk operated out of Washington until 1971 and, on 15 December of that year, was struck from the Navy list. On 26 September 1972, she was turned over to the state of Maryland to be used as a museum in the Inner Harbor at Baltimore.


Add Your Name to the
SS-423 Crew Roster