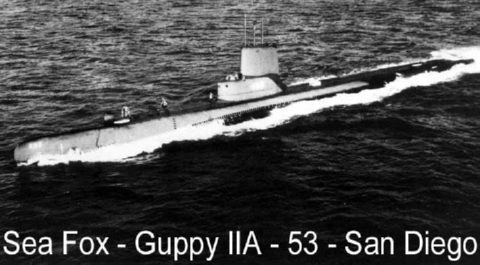 Two months after commissioning, Sea Fox departed New London for Hawaii and duty in Submarine Division (SubDiv) 282. She arrived at Pearl Harbor on 11 September and, on 4 October, got underway on her first war patrol. On the 16th, she entered her initial patrol area near the Bonin Islands, and remained in the Bonin-Vqlcano Islands area through the 25th, hunting enemy shipping and serving on lifeguard duty for Liberator strikes against Iwo Jima. On the 26th, she conducted her first attack and damaged an enemy freighter; then proceeded on to the Nansei Shoto in the Ryukyus. There, on 8 November, after firing 11 torpedoes in four attacks, she sank an engines-aft cargoman. Of the 11 torpedoes fired, several broached and one circled and passed over Sea Fox's conning tower. On 15 November, the submarine departed her assigned area and arrived at Majuro on the 24th for refit.

On her second war patrol, 20 December 1944 to 5 February 1945, Sea Fox returned to the Nansei Shoto as a unit of TG 17.19, a coordinated attack group comprised of herself, Blueback (SS-326), and Puffer (SS-268). En route to Saipan to top off with fuel, the submarines and their PC escort picked up survivors of a downed Liberator. On 28 December, the submarines departed the Marianas for the Ryukyus; and, on 1 January 1945, Sea Fox reached her patrol area. Nine days later, she made her only contact worthy of torpedo fire but, despite two attacks, was unsuccessful. Puffer, to which she reported the contact, later sank the target, Coast Defense Vessel No. 42.

Sea Fox's third war patrol, 8 March to 6 May 1945, saw her in the South China Sea-Formosa area. She made six contacts but was able to close and attack only one, a convoy of three merchantmen and four escorts. During that action, conducted in heavy fog on the morning of 1 April, she damaged one of the freighters. That same day, Queenfish (SS-393) sank the mercy ship, Awa Maru; and, on the 2d, Sea Fox was ordered into the area to pick up survivors and wreckage to determine the type of cargo the maru had been carrying. Sea Fox located no survivors but found bales of sheet rubber covering the area where the ship had gone down. She took aboard one of the sheets and continued her patrol.

The next day, one of Sea Fox's crew was accidentally shot by another crewman. Efforts to transfer the wounded man to a homeward-bound submarine were thwarted by rough seas, and the patient remained aboard for the duration of the patrol.

In mid-April, Sea Fox was off the northwest coast of Formosa where she encountered a shift in Japanese ASW tactics. Patrol planes were numerous at night, precluding recharging. The planes, however, were relatively inactive during daylight hours, and Sea Fox surfaced and recharged accordingly.

On the night of 16 and 17 April, Sea Fox departed her patrol area. Progress toward Saipan was slowed by a casualty in the bow plane rigging mechanism on the 19th; but, on the 26th, she arrived in the Marianas, and she reached Pearl Harbor on 6 May. Refit took a month, and Sea Fox sailed on 7 June for her last war patrol. Assigned primarily to lifeguard duty during the 53-day patrol, she picked up nine Army aviators near Marcus Island and a tenth in the Nanpo Shoto. On 29 July, she completed the patrol at Midway.

The war ended with the completion of refit, and Sea Fox headed toward Pearl Harbor for a two-week visit prior to getting underway for postwar duty with Sub-Ron 5 in the Philippines. Based at Subic Bay, she operated in the Philippine area into 1946; then, on 12 January, got underway to return to the United States.

Sea Fox arrived in San Francisco Bay on 2 February. Overhaul followed; and in mid-May, she returned to Pearl Harbor where she rejoined SubDiv 52. During the remainder of the 1940's, she was deployed three times: to the central Pacific in the summer of 1946, and to the western Pacific in the winter of 1948 and in the fall of 1949. The end of the latter year also brought a brief assignment to SubDiv 13, but January 1950 saw her a unit of SubDiv 12. Six months later, hostilities broke out in Korea; and Sea Fox's training exercises-mine planting, torpedo approaches, gunnery, and ASW-increased.

On 2 September 1951, the submarine sailed west. A six-month tour in the western Pacific followed during which she supported the United Nation's effort in Korea by providing services to the ASW training group and by patrolling in the northern Sea of Japan. In March 1952, she returned to the Hawaiian Islands to resume local operations and to prepare for a Guppy-IIA conversion.

Decommissioned on 15 October 1952 at Mare Island, Sea Fox completed conversion the following spring and was recommissioned on 5 June 1953. In August, she returned to Pearl Harbor and resumed operations-training exercises, special operations, and western Pacific deployments-as a unit of SubDiv 71. Reassigned to SubDiv 33 at San Diego on 1 July 1955, she became flagship of the division on 1 August and commenced local operations off the southern California coast. A year later, she sailed west for another six-month tour with the 7th Fleet; and, from then until 1969, she continued to rotate between training operations out of San Diego and duty with the 7th Fleet in the western Pacific. From 1964, her tours in WestPac included support of the Allied effort in Vietnam.

On 21 December 1968, Sea Fox returned to San Diego from her last WestPac deployment. Local operations, overhaul, and training exercises followed; and, in November 1970, she was declared unfit for further service. She was decommissioned, and her name was struck from the Navy list on 14 December 1970. Sea Fox earned four battle stars during World War II and four campaign stars for service during the Vietnam War.


Add Your Name to the
SS-402 Crew Roster