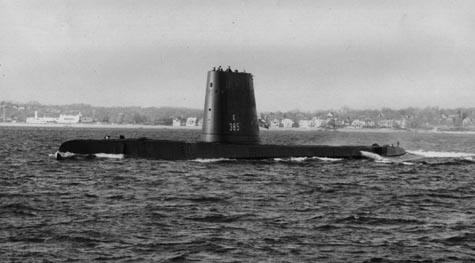 Bang's war operations span the period from 29 March 1944 until 18 May 1945 during which time she completed six war patrols. She is officially credited with sinking eight Japanese merchant ships totaling 20 177 tons while operating in the South China and Philippine Seas.

Bang arrived at Portsmouth Navy Yard 22 June 1945 and after repairs proceeded to New London where she went out of commission in reserve 12 February 1947.

Bang was converted to a Guppy type submarine and recommissioned 4 October 1952. Until August 1953 she conducted training off the east coast and in the Caribbean. During August-24 September 1953 she operated east of Iceland and off Scotland.

In January 1954 she sailed to the Mediterranean for a cruise with the 6th Fleet which terminated 11 March 1954 at New London Conn. Between March 1954 and December 1956 Bang operated out of New London on various exercises conducted two training cruises in the Caribbean one cruise to Halifax Nova Scotia and one trip to Quebec Canada.


Add Your Name to the
SS-385 Crew Roster