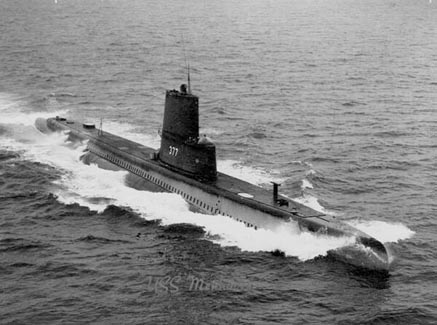 Skippered by Commander McClintock and manned by sailors from the redoubtable Darter (SS-227) Menhaden the last of the Manitowoc-built boats to have commissioned service during world War II trained in Lake Michigan until 15 July. Thence she was floated down the Mississippi River to New Orleans where she departed for the Canal Zone 27 July. She conducted extensive training out of Balboa during the closing days of the war against Japan and between 1 and 16 September cruised to Pearl Harbor for duty with SubRon 19.

On 24 November Menhaden broke the flag of Fleet Adm. Chester W. Nimitz CINCPAC and CINCPOA. Fleet Admiral Nimitz had selected Menhaden as his flagship during change of command ceremonies for she combined the new with the old. Although untried in combat she was one of the newest boats in the Submarine Service and incorporated the latest improvements in submarine design and equipment. Moreover her "gallantly battle-tested" crew epitomized the "valor skill and dedicated service of submariners" during the long Pacific war. Thus on her deck that morning Fleet Admiral Nimitz read his orders assigning him to duty as Chief of Naval Operations and his relief Adm. Raymond A. Spruance read orders making him CINCPAC and CINPOA.

Menhaden recommissioned 6 March 1953 Lt. Comdr. William R. Werner in command. She Joined SubRon 3 at San Diego 12 June and on 21 September she sailed for the Far East. Operating out of Yokosuka she ranged the East and South China Seas until 11 February 1954; thence she returned to San Diego 23 3 March. For the next year and a half she operated in the eastern Pacific where she participated in fleet readiness exercises and type training assignments. On 15 August 1955 she began her second deployment to WestPac where she joined and supported the ever-vigilant Taiwan patrol force. She returned to the west coast 17 February 1956.

Since 1955 Menhaden has completed six more deployments in the troubled waters of the Far East As a unit of SubDiv 32 she cruised the western Pacific from Japan and Taiwan to the Philippines and Australia. She carried out surveillance and reconnaissance patrols off past and present areas of cold war conflict from Korea to Vietnam. She has acted with skill diligence and dispatch while serving as both a weapon of war and an instrument of peace. Her valuable support of and contributions to the mighty 7th Fleet have bolstered this versatile force which as the powerful seagoing arm of freedom in the Far East has contained communism and thwarted its spread in Southeast Asia.

When not deployed in the western Pacific Menhaden has maintained a schedule of intensive readiness and alert exercises. Home ported at San Diego she has participated in numerous fleet and intertype exercises. In addition she has supported sonar school operations and has provided vital at sea training for members of the Navy's Submarine Reserve Force.

Early in 1968 Menhaden returned to the western Pacific and gave visible meaning to the might of America seapower. During a6-month deployment she concentrated her operations in the troubled waters of Southeast Asia as the United States increased the effort to protect and defend the independence and integrity of South Vietnam from aggression of the North Vietnamese Communists. Later in the year she returned to the west coast where she continued to prepare for future "keeping-the-peace" missions. Into 1969 her training and deployments remain vital to the defense of the Nation and the free world and clearly demonstrate to friend and foe alike that the influence of U.S. seapower grows stronger as the cold war grows longer.


Add Your Name to the
SS-377 Crew Roster