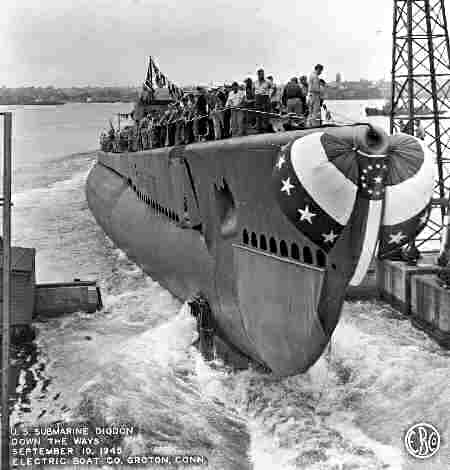 Diodon (SS-349) was launched 10 September 1945 by Electric Boat Co. Groton Conn.; sponsored by Mrs. D. Cullinane; and commissioned 18 March 1946 Lieutenant Commander J. M. Hingson in command. Diodon arrived at San Diego Calif. 5 July 1946, and during the next 4 years joined in training operations along the west coast. in Alaskan waters, and in the Hawaiian Islands as well as training members of the Naval Reserve.

She was extensively modernized at Mare Island Naval Shipyard between August 1947 and March 1948. On 14 September 1950 Diodon sailed for the Far East rescuing six aviators off Guam during her passage. She trained frigates of the Republic of Korea in antisubmarine warfare in Sagami Wan Japan and from 30 October to 28 November made a simulated war patrol. She passed undetected through Tsugaru Strait to Otaru, Hokkaido then continued her patrol undetected as she observed and photographed shipping in La Perouse Strait. She returned to the west coast for overhaul from February to May 1951.

Resuming her west coast operations Diodon aided in the training of Canadian naval air and surface forces out of Esquimalt B.C. from October to December 1952. She returned to the Far East from March to September 1954 again conducting a surveillance patrol in La Perouse Straits from 24 May to 22 June. During her west coast training operations in the next 2 years

Diodon again operated with the Canadian Navy and in March 1956 admitted visitors by means of a submarine escape bell while 130 feet below the surface during rescue drills.

During her 1956-57 tour of duty in the Far East Diodon visited Brisbane Australia for the celebration commemorating the great victory of the Battle of the Coral Sea in May 1942. She served again in the Far East in 1958-59 and 1960.


Add Your Name to the
SS-349 Crew Roster