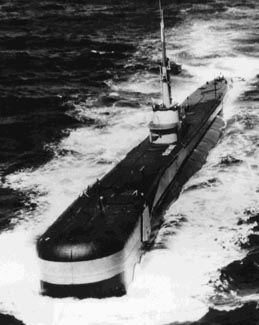 departed Subic Bay Philippine Islands in September 1945 and arrived at San Francisco on the 24th. Shortly thereafter she began inactivation and on 14 May 1946 went out of commission in reserve at Mare Island Naval Shipyard.

was recommissioned 10 February 1948 and converted to an electronics experimental submarine. Reclassified AGSS-318 12 August 1949 Baya has since conducted experiments for the Navy Electronics Laboratory San Diego Calif. participated in local operations near San Diego; and has served with the joint American-Canadian Task Force gathering scientific data off western Canada in November and December 1948. During July-September 1949 she made a cruise to the Arctic to gather valuable scientific data in the Bering and Chukchi Seas. Between July and October 1955 she was deployed to Pearl Harbor on further experimental research.


Add Your Name to the
SS-318 Crew Roster