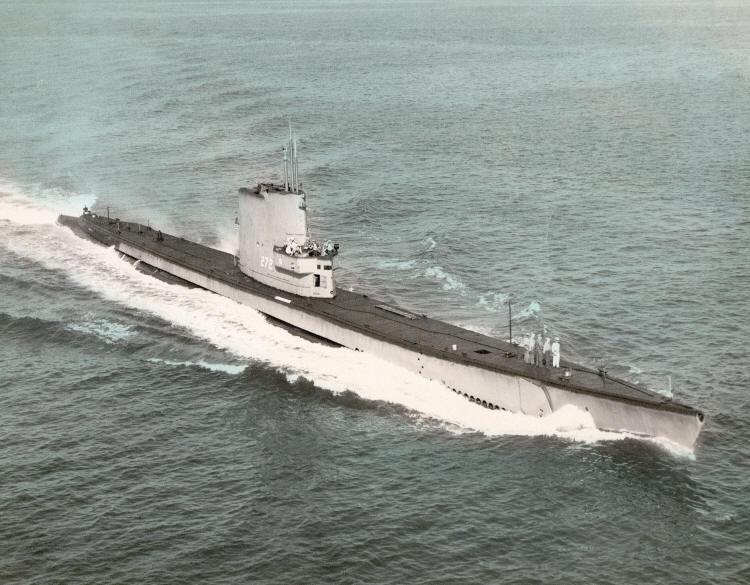 Departing New Orleans 15 October 1943 Redfin proceeded to Fremantle Australia. On her first war patrol 4 January to 17 February 1944 she encountered an enemy convoy of four ships in the South China Sea 16 January. From 8 to 14 March she patrolled north of Australia to defend against a possible Japanese attack.

On her second war patrol 19 March to 1 May Redfin sank the 1 900-ton Japanese destroyer Akigumo off Zamboanga Mindanao 11 April. During the night of 15-16 April she sank two Japanese passenger-cargo ships Shinyu Maru 4 621 tons and Yamagata Maru 3 807 tons. On the night of 22-23 April she landed four of her crew near Dent Haven Borneo to evacuate a British reconnaissance party. Attacked by the Japanese the landing party returned to Redfin but the British agents were later evacuated by an Australian officer and transferred to Harder (SS-257).

On her third war patrol 26 May to 1 July she landed six Philippine guerrillas on a small island near Balabac Strait 8 June. Proceeding to scout the enemy naval base at Tawi Tawi she sank the 5 142-ton Japanese tanker Asanagi Maru on the 11th. She also warned American forces in the Marianas of the departure from Tawi Tawi of the Japanese task force that was later defeated in the Battle of the Philippine Sea on the lOth and the 20th. Operating off Leyte on the 24th she sank the 3 028-ton Japanese passenger-cargo ship Aso Maru before returning to Fremantle.

Departing Fremantle 6 August she laid a minefield off the west coast of Borneo on the 19th and rescued eight survivors of Flier (SS-250) at Palawan Island on the 30th. After lifeguard duty for airstrikes against Balikpapan Borneo she departed Fremantle 26 October and sank the 15 226-ton Japanese tanker Nichinan Maru No. 2 west of the Philippines 8 November. Completing her fourth war patrol 7 January 1945 she proceeded to Mare Island Naval Shipyard San Francisco where she received special mine detection gear. Underway from Pearl Harbor 30 May to 10 July and later from 30 July to 5 September she made mine surveys first off Honshu and Hokkaido and later off Kyushu Japan.

Decommissioned at New London Conn. 1 November 1946 she entered the Philadelphia Naval Shipyard in April 1951 for conversion and was reclassified SSR. Recommissioned 9 January 1953 she engaged in radar-picket duty for the next 6 years in American coastal waters off northern Europe and in the Mediterranean.

In April 1959 she entered the Philadelphia Naval Shipyard and received an inertial guidance system. Redfin became a laboratory and training ship for the testing of inertial guidance systems used in Polaris submarines. She preceded the first ballistic missile submarine George Washington (SSBN-598) as flagship of Submarine Squadron l 4. After searching for the lost Thresher (SS-593) in April 1963 she was reclassified AGSS on 28 June. Operating in the Atlantic she continued to assist in special research and development projects including the Polaris A-3 missile until she decommissioned 15 May 1967 to become a Naval Reserve Training Ship at Baltimore Md. Redfin was struck from the Navy list on 1 July 1970 and sold to the North American Smelting Co. Wilmington Del. on 3 March 1971.


Add Your Name to the
SS-272 Crew Roster