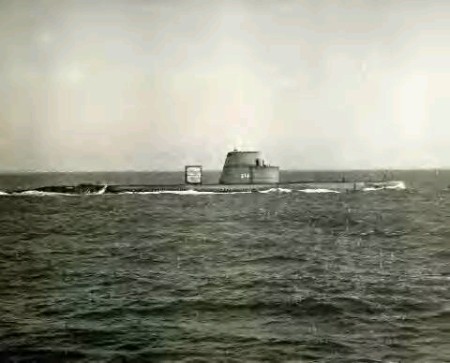 After shakedown in Long Island Sound, Grouper sailed for Pearl Harbor 30 March 1942 to join the Pacific Submarine Force which was to play havoc on Japanese shipping. Before departing for her first war patrol, Grouper was assigned to the submarine screen which ringed the area as the American and Japanese fleets clashed in the decisive Battle of Midway. Patrolling the fringe of the fighting 4 June, Grouper sighted two burning enemy carriers, but could not close for attack because of heavy air cover. On that day she was strafed by fighter planes and driven deep in a series of aircraft and destroyer attacks which saw over 170 depth charges and bombs dropped on the novice submarine.

On 5 June as the battle still raged, Grouper crash-dived to avoid heavy bombers, then after 3 days at Midway to fuel and provision, Grouper sailed on her first war patrol 12 June. She torpedoed and damaged two Japanese marus in the China Sea before returning to Pearl Harbor 30 July. On her second patrol (28 August-9 October) Grouper had the satisfaction of sending to the bottom two freighters, Tone Maru on 21 September and Lisbon Maru on 1 October. Her third patrol, made 12 November to 31 December as she patrolled to Brisbane, Australia, was enlivened by the sinking 17 December of Bandoeng Maru, a passenger-freighter headed for the Solomons with troop reinforcements.

During her fourth war patrol (21 January-18 March 1943) Grouper rescued an aviator stranded on Rengi Island for several days and located several key Japanese radar installations in the Solomons. Her next four patrols netted her no further kills, despite several determined attacks, but illustrated the varied tasks submarines took on during the war. In addition to her regular patrol duties, which harassed Japanese shipping and tied up valuable warships desperately needed by the enemy, Grouper landed 50 men and 3,000 pounds of gear on New Britain Island to carry on guerrilla warfare and at the same time rescued an American aviator stranded there almost 3 months. At the conclusion of her eighth patrol, Grouper headed for the States and overhaul, reaching San Francisco 19 October 1943.

After returning to Pearl Harbor 7 January 1944 for additional repairs, the veteran submarine sailed for her ninth war patrol 22 May. This patrol netted Grouper what was to be her last kill of the war, Kumanoyama Maru, which she sank in a night surface attack 24 June. Grouper's final three war patrols found a lack of targets- American submarines had done their job on Japanese shipping too well for Grouper's purposes. She stood lifeguard duty during several air strikes and rescued seven downed aviators during raids on the Palaus in September 1944.

Returning to Pearl Harbor from her 12th war patrol 26 April 1945, Grouper sailed for San Francisco and overhaul the following day. She returned to Pearl Harbor 6 August, but V-J Day cancelled plans for another patrol, and on 9 September Grouper in company with Toro and Blackfish, sailed for New London. Four years of local operations and training exercises along the coast to Florida and in the Caribbean followed for Grouper. During this period she chalked up two "firsts:" in 1946 she became the first submarine to have a Combat Information Center installed, and the following year she effected the first discharge and recovery of men from a submerged and underway submarine.

These operations ended 5 March 1950 as Grouper entered the Mare Island Ship Yard for conversion to the Navy's first "killer" submarine. Her classification was changed to SSK-214 on 2 January 1951. With the addition of a snorkel and extensive sonar and radar facilities, Grouper emerged from the yard 27 June 1951 to pioneer in research on the deadly submarine-versus-submarine warfare. For the next 8 years, as a unit of Submarine Development Group 2, Grouper worked to develop and test concepts of hunter-killer antisubmarine warfare. In this duty she ranged along the East Coast from Nova Scotia to Florida as well as participating in Caribbean exercises. In 1953 and 1955 exercises took Grouper across the Atlantic to Rothesay, Scotland, via Iceland. In the fall of 1957 she then participated in NATO maneuvers.

Grouper was reclassified AG(SS)-214, 17 May 1958, and on 28 November 1959 she entered the Portsmouth, N.H., Navy Yard for extensive modification. Her forward torpedo room was converted into a floating laboratory, work benches and additional berths for scientists were installed, and various types of sonar gear were added topside. Thus equipped, Grouper departed Portsmouth 23 June 1960 to embark on the fourth phase of her long career, research vessel for the Naval Research and Underwater Sound Laboratories. Her duties as a floating laboratory took her frequently to the Caribbean and Bermuda, although she retained New London as her home port and engaged in operations there and as far north as Nova Scotia. Her efforts were focused on the study of sound propagation in water. In December 1962 Grouper entered the Philadelphia Naval Shipyard for overhaul and modification to prepare for further work in this field. Grouper left the Philadelphia Naval Shipyard in May 1963 to resume her investigation of waterborne sound.

In June of 1964 Grouper was awarded the coveted Battle Efficiency "E". In November 1965 the submarine again entered the Philadelphia Naval Shipyard for overhaul and equipment modifications to increase her usefulness as a floating underwater sound laboratory. She departed Philadelphia 1 May 1966, reached New London 1 June, and headed for the Caribbean for intensive research. Her studies during 1966 also took her to Narragansett Bay and twice to Bermuda. At the beginning of 1967 Grouper was at New London preparing to resume gathering knowledge of underwater sound propagation.

At present Grouper is still adding accomplishments as a floating laboratory to her long and outstanding record during both war and peace.


Add Your Name to the
SS-214 Crew Roster