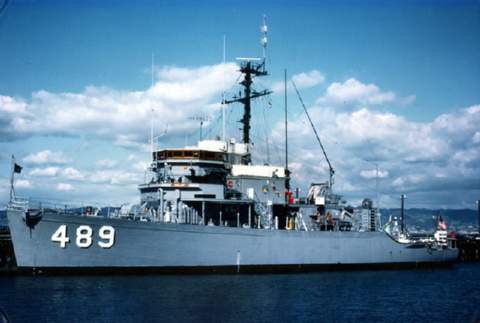 Final Disposition: Sold to the Republic of China 8 September 1994

After shakedown Gallant based from Long Beach Calif. as a unit of Mine Division 96 Mine Force U.S. Pacific Fleet. Her readiness exercises ranged as far south as Acapulco Mexico. She rescued two crew members of a Navy plane downed off Santa Catalina Island and joined Mine Division 73 in January 1957 for concentrated training preparatory to a 6-month tour with the 7th Fleet; (March-August 1957). This duty found her in Korean waters for combined operations with the Republic of Korea Navy followed by similar service off Formosa with units of the Chinese Nationalist Navy. Other training took her to ports of Japan and Hong Kong before her return to Long Beach 20 August 1957.

After a yard overhaul at San Diego she took part in amphibious landing exercises along the California coast followed by combined mine sweeping operations; with Canadian Mine Squadron 2 off the coast of Vancouver British Columbia in October 1958. Another overhaul period was completed by April 1959 when she began refresher training and mine countermeasures exercises that won her the Battle Efficiency Competition Award "E" and the Minesweeping "M" as the outstanding minesweeper of the Pacific Mine Force during Fiscal 1959.

Gallant's second tour with the 7th Fleet (August 1959-March 1940) again included training with the Republic of Korea Navy. While operating out of the Philippines she participated in joint readiness operations with the navies of SEATO nations. She returned to Long Beach in March 1960 and spent the next 12 months in a training schedule with the Mine force of the 1st Fleet that carried her as far north as Ketchikan Alaska.

Service during her third deployment in the Far East (August 1961-April 1962) once again included fleet readiness defense exercises with the free-world navies of Southeast Asia. In addition she patrolled the coast of South Vietnam and provided valuable service during training operations of the South Vietnam Navy. Returning to the West Coast 20 April 1962 she resumed duty out of Long Beach; and during the next 15 months participated in fleet maneuvers and mine squadron exercises off southern California.

Departing Long Beach 12 August 1963 Gallant steamed on her fourth deployment to the troubled Far East where she arrived Sasebo Japan 23 September. There she resumed peace-keeping operations with the mighty 7th Fleet; and during readiness patrols in Far Eastern waters she cruised from the coast of South Korea through the East China and South China Seas to the coast of Southeast Asia. She departed WestPac in the spring of 1964 and after additional training in hunting mines sailed for blockade and coastal patrol duty off Vietnam. Arriving off the southern coast of South Vietnam 1 October 1965 she joined Operation "Market Time" designed to control coastal infiltration of men and supplies by the Viet Cong. Throughout the remainder of the year Gallant boarded and searched suspicious Vietnamese boats providing valuable support for the Republic of Vietnam in her struggle against Communist insurgency.

She supported "Market Time" operations until 9 March 1966 when she departed for the United States. Steaming via the Philippines Guam and Pearl Harbor she arrived Long Beach 28 April. During the remainder of the year she operated along the West Coast from Long Beach to Portland Oreg to maintain her fighting capabilities and operational readiness.


Add Your Name to the
MSO-489 Crew Roster