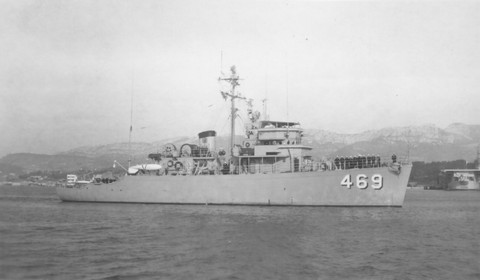 Redesignated MSO-469 on 7 February, Sagacity completed shakedown training in May, then took up local operations out of her home port, Charleston, S.C. Assigned to Mine Division (MinDiv) 84, she conducted her first eastern Atlantic-Mediterranean deployment in the fall of 1956. The four-month deployment was followed by a return to minesweeping exercises in the Caribbean and off the Carolina and Florida coasts.

Biennially deployed to the Mediterranean for duty with the 6th Fleet from that time until 1967, she was employed on projects for the Naval Mine Warfare School at Charleston, the Mine Defense Laboratory at Panama City, and the Naval Ordnance Test Facility at Fort Lauderdale during her 2d Fleet duty. Occasionally assigned to planeguard duty for helicopters from amphibious assault ships, target towing, and to patrol duties, she was also a unit of the Project Mercury recovery force in January 1962.

In January 1968, Sagacity steamed east for her last tour with the 6th Fleet, spending most of her time in the western Mediterranean. She returned to Charleston in June; and, until March 1970, operated off the east coast. In March 1970, she grounded at the entrance to Charleston harbor, causing extensive damage to her rudders, shafts, screws, keel, and hull.

Five months later, as the Navy continued its force level reduction, Sagacity was ordered inactivated. She was decommissioned and struck from the Navy list on 1 October 1970.


Add Your Name to the
MSO-469 Crew Roster