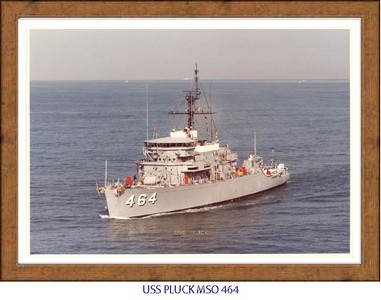 Following shakedown Pluck reported for duty to Commander Mine Forces Pacific. She deployed to WestPac in January 1956 and returned in June to Long Beach Calif. for overhaul. During January and February 1957 she assisted survey operations in Long Beach Harbor.

Assigned to WestPac 2 June 1958 Pluck operated off Taiwan in August and September during the Quemoy crisis Deployed to WestPac 31 August 1960 she delivered four tons of textbooks to Batangas Philippines in January 1961 as part of operation "Handclasp". On her next assignment to WestPac 2 July 1962 Pluck made a good will tour of Mindanao and Panay Islands Philippines in September before returning to Long Beach Calif. Upon completion d overhaul she rejoined her sister ships at Long Beach 1 October 1963.

After type training in Hawaiian waters she deployed to WESTPAC 28 September 1964. During February and March 1965 she monitored coastal shipping off South Vietnam. On her next deployment to WestPac 16 May 1966 she completed four more coastal patrols beginning July 1966 and ending 2 February 1967. In 1968 she underwent major over haul from 29 January to 1 July and in November participated in an evaluation of the Red Eye antiaircraft missile.

Into 1970 Pluck remained active with the Pacific Fleet.


Add Your Name to the
MSO-464 Crew Roster