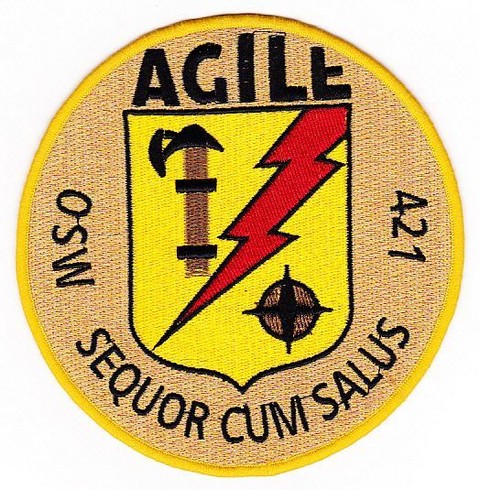 The non-magnetic ocean minesweeper completed fitting out at New York and then sailed on 13 July for her home port Charleston S.C. She remained there for about two weeks before getting underway on 31 July for her shakedown training. Agile operated out of Guantanamo Bay Cuba between 8 August and 6 September and returned to Charleston on the 10th of the latter month. Type training and post-shakedown availability at the Charleston Naval Shipyard followed. The beginning of 1957 found her still at Charleston but preparing to embark upon her first deployment to the Mediterranean Sea.

Agile began her first Atlantic crossing on 12 February 1957 transited the Strait of Gibraltar on the 26th and cruised with the 6th Fleet for three months. During that time the ship participated in two amphibious exercises and visited several Mediterranean ports. Among her ports of call were Patras and Athens on the Greek mainland; the Greek islands of Samos Rhodes and Crete and Cannes France. The crisis in Jordan in April kept her in the eastern portion of the Mediterranean for most of her first deployment. After turnover at Rhodes Agile began the long voyage home on 25 May; and she re-entered Charleston with her division mates on 16 June.

Post-deployment leave and upkeep occupied the ensuing five weeks. On 26 July the minesweeper got underway for Little Creek Va. to participate in harbor defense and minesweeping exercises. However damage to her propeller forced her into repairs at the Newport News Shipbuilding & Dry Dock Co. and precluded her participation in the exercises. The repairs ended on 25 September and the warship departed Newport News that same day. Returning to Charleston five days later she spent the bulk of October conducting acoustic trials out of her home port.

On 26 October the minesweeper stood out of Charleston on her way to Panama City Fla. where she reported on the 31st for duty with the Mine Defense Laboratory. She assisted the laboratory in the conduct of special mine defense tests for five weeks completed that service on 5 December 1957 and headed back to Charleston. December brought the usual year's-end holiday leave period. The New Year 1958 began with a two-week availability alongside a tender February saw Agile pass her final acceptance trials and an operational readiness inspection. On 17 February the minesweeper entered the Charleston Naval Shipyard for regular overhaul. She completed repairs by June and began duty with the shipyard testing propeller blades. During July and August the warship conducted refresher and type training. September brought preparations for overseas movement.

Agile put to sea on 29 September 1958 bound for her second tour of duty with the 6th Fleet. Port calls and exercises - notably an amphibious landing exercise carried out on the southern coast of Sardinia highlighted that deployment in the Mediterranean. She passed through the Strait of Gibraltar on 26 January 1959 and began the return voyage to the United States. En route home the warship made a brief stop at Bermuda before re-entering Charleston on 11 February. Between the time of her return and the beginning of summer the warship carried out tests and conducted minesweeping operations out of Charleston. By the beginning of the second week in August she was working with the Mine Warfare School as a training platform. That service lasted until she began her holiday leave period in December 1959

The minesweeper entered the Charleston Naval Shipyard on 29 January 1960 and began a regular overhaul. She completed overhaul on 5 April and the following month conducted postoverhaul refresher training and minesweeping exercises. On 28 June Agile joined her division mates in deploying to the West Indies. After a round of port visits and exercises she returned to Charleston on 13 September. Later that month the minesweeper moved north to Nova Scotia where she participated in Operation "Sweepclear V " a NATO minesweeping exercise. Atlantic coast operations continued into 1961 when she began preparations for her third deployment to the Mediterranean.

Agile departed Charleston on 10 April 1961 in company with the other ships of her division. They arrived at Rota Spain on 25 April and took on fuel before entering the Mediterranean. For the next five months' Agile plied the waters of the "middle sea" showing the flag and honing her combat skills. She participated in two 6th Fleet amphibious exercises as well as the NATO Exercise "Checkmate." She and her division mates were relieved at Pollensa Bay Majorca on 28 September and began the long voyage home. The return passage ended at Charleston on 14 October.

Following post-deployment standdown the minesweeper entered the Charleston Naval Shipyard in mid-November for regular overhaul. She left the shipyard in January 1962 and after refresher training resumed operations out of Charleston with the Atlantic Fleet Mine Force. Until the beginning of May Agile conducted independent ship's exercises type training and training missions for the Mine Warfare School. On 2 May she departed Charleston bound for Panama City Fla. For a little more than a month the warship performed service in support of experiments and tests conducted by the Naval mine Defense Laboratory. She returned to Charleston on 8 June began preparations for a deployment to the West Indies and embarked upon that assignment on 20 July. The minesweeper made port visits participated in an amphibious exercise at Vieques Island and joined other American ships off Haiti for a show of force during another of that country's frequent periods of internal disorder.

Agile returned to Charleston on 9 November underwent two weeks of repairs alongside a tender and then finished out the year with post-deployment standdown followed by holiday leave and upkeep. On 8 January 1963 she put to sea for a fleet service mine test which ended on the 25th. At that point the ship resumed normal operations out of Charleston providing services to the Mine Warfare School as well as conducting the usual independent ship's exercises and type training. Between 4 and 25 May she participated in the NATO Exercise "Sweepclear VIII" in the vicinity of Mayport Fla. Six weeks of local operations out of Charleston followed. On 5 July the minesweeper departed her home port once again bound for Little Creek Va. where she provided services to the Operational Test and Evaluation Force. She returned to Charleston on 25 July and after a two-week tender availability resumed local operations. On 29 October the vessel entered the yard at the Charleston Drydock & Shipbuilding Co. for a two-month overhaul.

The warship completed the repair period on 3 January 1964 Local operations and refresher training filled her time until the last week in March. Beginning on 22 March she spent three weeks as a school ship for the Mine Warfare School. Following that duty the ship once more began preparations to deploy to the Mediterranean. She departed Charleston on 15 May and reported in at Malaga Spain on 3 June. In addition to the usual exercises and port visits Agile participated in a cruise to northern Europe. She left the Mediterranean on 17 July and visited ports in England Germany Denmark Belgium and France. the minesweeper retransited the Strait of Gibraltar on 17 September and resumed duty with the 6th Fleet. Relieved of duty at Huelva Spain he headed back to the United States on 29 October. Agile arrived back in Charleston on 17 November and began a post-deployment tender availability that lasted a month. The remainder of the year brought holiday leave and upkeep

The 1964 Mediterranean cruise proved to be the last of her career. During the remainder of her active service some seven years and six months Agile served in waters near North America. She deployed to the West Indies and to the Gulf of Mexico several times but otherwise conducted local operations out of Charleston. At various times the minesweeper served as a school ship for the Mine Warfare School and as a test platform for both the Mine Defense Laboratory at Panama City Fla. and the Naval Ordnance Facility at Fort Lauderdale Fla. In between those special assignments the warship engaged in independent ship's exercises and type training. Those activities came to an end however on 28 July 1972 when Agile was placed out of commission at Charleston. Later that year she was moved to a permanent berthing area with the Norfolk Group Atlantic Reserve Fleet. There she remained for more than seven years Her name was struck from the Navy list in September 1977 and she was sold to the Union Minerals & Alloys Corp. in February 1980 for scrapping.


Add Your Name to the
MSO-421 Crew Roster