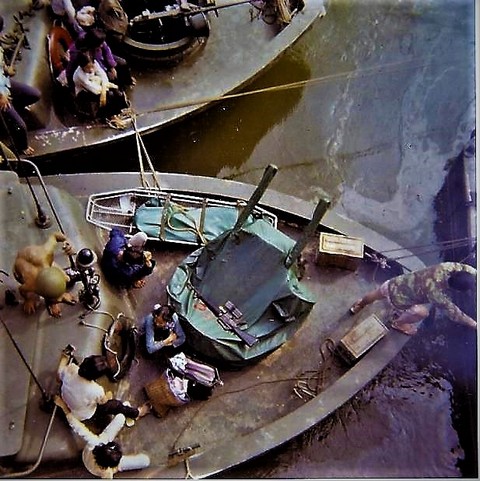 After shakedown off Florida LST-786 departed Mobile Ala. 30 September and sailed for the Pacific. She loaded cargo and men of the 112th Navy Construction Battalion at Pearl Harbor before arriving Eniwetok 28 December. During January 1946 the landing ship made another cruise to Pearl Harbor for supplies returning to the Marshall Islands 21 February.

With Iwo Jima now in American hands LST-786 transported a group of Seabees to that tiny volcano island in late March. While at Iwo she embarked 114 prisoners of war for transportation to Guam arriving there 20 April. Eight days later she sailed with another detachment of Seabees bound for that last Japanese barrier -- Okinawa. Arriving 8 May in the area off "Green Beach " LST-786 unloaded her cargo under the constant threat from enemy air raids and sailed 20 May for the Philippines.

For the rest of the war she shuttled troops and equipment among the Philippines and to Okinawa further strengthening the path to Japan. On 4 August her convoy was attacked by an enemy submarine which was sunk by Earle V. Johnson (DE-703) after a 3-hour duel.

After V-J Day LST-786 operated in the Far East. where she provided transportation services for the occupation troops in Japan Korea and Okinawa. The landing ship departed Sasebo 8 December and arrived San Francisco 14 January 1946. LST-786 decommissioned at Astoria Oreg. 9 July 1946 and was assigned to the Pacific Reserve Fleet.

She was assigned the name Garrett County 1 July 1955. As the American role in the Far East expanded the need for landing craft increased to handle the large buildup of U. S. forces in Vietnam. Garrett County recommissioned 15 October 1966 for service in the Pacific Fleet. Early in 1967 she sailed for the Far East and for the next months operated off Vietnam supporting the struggle to thwart Communist aggression in Southeast Asia.


Add Your Name to the
LST-786 Crew Roster