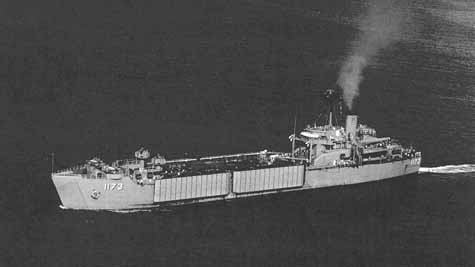 Suffolk County fitted out at Boston and sailed for Norfolk Va. on 1 October to hold shakedown training and exercises in beaching. She returned to Boston from 5 December 1957 to 3 February 1958 for post-shakedown availability. The ship was back at Norfolk three days later and began local training exercises. From 19 July to 7 August the LST participated in amphibious training exercises off Puerto Rico.

Suffolk County departed Norfolk on 8 September and after embarking marines at Morehead City N.C. sailed for the Mediterranean and her first tour with the 6th Fleet. Between fleet exercises she called at ports in Lebanon, Crete, Greece, Turkey, Italy, Libya, and Spain. The ship stood out of Rota Spain on 12 March 1959. After disembarking the marines at Morehead City she returned to Norfolk on the 26th. In June she participated in Operation "Inland Seas" which was the formal opening of the St. Lawrence Seaway for ocean-going ships.

Suffolk County returned to Norfolk in August and was assigned to Amphibious Squadron (PhibRon) 8 which promptly deployed to the Mediterranean until 12 June 1960 when it returned to Norfolk. After a leave and upkeep period she moved to Charleston S.C. for her first overhaul which lasted from mid-July to 15 September. As a unit of PhibRon 8 the ship participated in a landing demonstration off Onslow Beach N.C. from 29 October to 3 November. The following month found her in the Caribbean on a two-month deployment ending at Norfolk on 17 January 1961.

Suffolk County returned to the Caribbean in April on a normal deployment. However she was called upon to operate off Guantanamo Bay from 25 April to 5 May and off the Dominican Republic from 1 to 13 June because of the international tension those two countries were creating. She returned to Norfolk and operated from there until 15 September when she sailed on Solant Amity III deployment. After loading marines and equipment at North Carolina she proceeded to Trinidad. Suffolk County was attached to Task Force (TF) 88 for the remainder of the cruise which included port calls at South Africa French Equatorial Africa, Sierra Leone, Guinea, and Liberia. She returned to Little Creek on 16 December 1961.

Suffolk County operated along the east coast participating in various operations deployments and exercises which took her as far south as the Caribbean Panama and the Dominican Republic until 1966. She was at Guantanamo on 26 September 1966 when hurricane "Inez" struck the Caribbean and left a path of destruction in Hispaniola. Suffolk County aided the inhabitants of Jacmel-Cayes Anse-a-Pitre and Marigot on the southern coast of Haiti until 7 October. The LST then continued her routine operations until early 1968.

On 16 April 1968 Suffolk County sailed for another deployment period with the 6th Fleet which lasted until 4 June. Normal peacetime east coast operations were resumed until September 1970 when she steamed to the Mediterranean to partake in a two-month exercise with North Atlantic Treaty Organization fleet units which ended on 18 November 1970. Her normal routine was next broken in September 1971 when she deployed to the 6th Fleet for her longest tour in years which lasted until mid-March 1972.