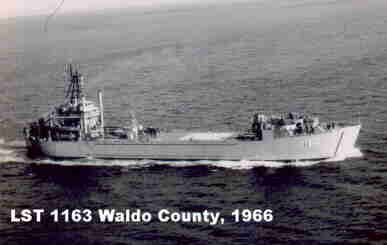 Named for: Waldo County in Maine

LST-1163 departed Pascagoula on 14 October and steamed via Key West, Port Everglades, and Charleston to her permanent home port, the amphibious base at Little Creek, Va. She arrived at Little Creek on 25 October. Exercises and shakedown training occupied the remainder of 1953 and the first few months of1954. On 14 June 1954, the tank landing ship departed Little   Creek   for   Morehead   City,   N.C.,   to   embark marines for amphibious exercises. She arrived at Morehead City on the  15th, loaded troops  and equipment, and   got   underway   on   the   16th   for   Vieques   Island located near Puerto Rico in the West Indies. The ship reached Vieques on 21 June and conducted amphibious training until 1 July when she headed back to Little Creek. She arrived at Little Creek on 5 July and remained there eight days before entering the  Norfolk Naval Shipyard on 13 July. She left the shipyard on 6 August and returned to Little Creek to resume duty with the  Amphibious  Force,  Atlantic  Fleet.  For  the remainder of the year, LST-1163 conducted  a  series of amphibious exercises, mostly at Vieques in the West Indies, but she also participated in one cold weather exercise at Hamilton Inlet on the coast of Labrador in November.

On 18 January 1955, she entered the Philadelphia Naval Shipyard for her first major overhaul. She emerged from the yard, revitalized, on 20 May and resumed duty with the Amphibious Force. On 1 July1955, LST-1163  became   Waldo   County   (LST-1163). Through the summer of 1955, Waldo County remained close to or in Little Creek; however, on 24 August, she departed the Norfolk area for her first overseas deployment. After stops at Bordeaux in France, Port Lyautey in Morocco, and at Gibraltar, she joined the 6th Fleet in the Mediterranean late in September. For the next four months, she ranged the length and breadth of the "middle  sea,"  conducting  6th  Fleet amphibious  exercises and making port visits. On 25 January 1956, she departed  Port  Lyautey  on  her  way  home.   The  ship returned to Norfolk on 6 February and resumed operations with the 2d Fleet.

In her first two years of active service, Waldo County established a pattern of operations which endured until the end of 1964. She alternated five Mediterranean deployments with periods of duty out of Little Creek conducting amphibious training at such places as Vieques Island, Onslow Beach in North Carolina, and at various locations in the Canadian maritime provinces. During her second Mediterranean deployment, which lasted from August of 1957 to February of 1958, she acted as a unit of the contingency force established in the eastern Mediterranean during the civil unrest in Lebanon. The remaining three deployments were more routine in nature, consisting only of training missions and port visits. Between her third and fourth deployments to the 6th Fleet, she earned the Armed Forces Expeditionary Medal in November and December of 1961 when she cruised Cuban waters as a part of another contingency force established in response to the wave of government terrorism which followed the abortive Bay of Pigs invasion. Otherwise, the periods between deployments consisted entirely of routine 2d Fleet operations, primarily amphibious training missions at the previously named locations.

Waldo County returned to Little Creek from her fifth and last Mediterranean cruise on 17 November 1964. At that point, she began a new phase of her career. No longer did she deploy to the 6th Fleet. For the remaining six years of her active career, the tank landing ship confined her operations to the Atlantic seaboard and the West Indies. The ubiquitous amphibious exercises predominated; but, on two occasions, she did perform special missions. In May and June of 1965, she again earned the Armed Forces Expeditionary Medal when she joined another contingency force in the West Indies during a period of extreme internal unrest in the Dominican Republic quelled by the intervention of forces of the Organization of American States. The following year, she qualified for that award again by returning to the island republic once more. From that time on, Waldo County broke her routine of Atlantic coast-West Indies operations only one time. In January 1970, she steamed to the Panama Canal and transited it for a brief series of landing exercises on the Pacific side of the isthmus. She retransited the canal on 2 February and resumed operations in the West Indies. Normal operations occupied her time until September at which time she began preparations for inactivation.

Waldo County was decommissioned sometime in October 1970, and she was berthed with the Atlantic Reserve Fleet at Orange, Tex. She remained there until May of 1972 at which time she was reactivated for service with the Military Sealift Command (MSC). Operated by a civil service crew in a non-commissioned status, USNS Waldo County served with MSC only briefly, about 18 months. Her name was struck from the Navy list on 1 November 1973, and she was transferred to the Maritime Administration for layup with its National Defense Fleet located at Suisun Bay, Calif. As of January 1980, she remained at Suisun Bay.