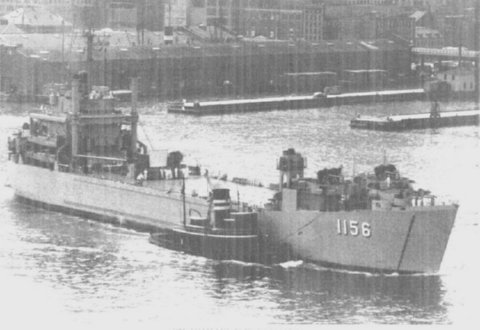 Following trials and shakedown LST-1156 underwent post-shakedown alterations at the Norfolk Navy Yard before commencing operations out of Little Creek with Amphibious Forces Atlantic Fleet on 14 September 1953. The ship then conducted training exercises out of Little Creek before entering the Norfolk Navy Yard for conversion to an LST Flotilla flagship involving the installation of much new communications equipment. LST 1156 remained on operations out of Little Creek through June 1955. On 1 July 1955 the ship was named Terrebonne Parish while retaining her designation of LST-1156.

Following operations in the Caribbean and off North Carolina and overhaul at the Charleston (S.C.) Naval Shipyarl Terrebonne Parish conducted a cruise to Lisbon Portugal and Port Lyautey French Morocco before resuming local operations out of Little Creek. She continued participating in exercises and assault landings in the Caribbean and returned to Norfolk on 14 May 1957 to resume local operations and type training.

On 29 August 1957 Terrebonne Parish cleared Norfolk for Morehead City N.C. and on the following day embarked marines vehicles and cargo for transport to the Mediterranean. The LST joined units of the 6th Fleet at Taranto Italy on 16 September. During the subsequent tour the ship took part in NATO landing exercises at Saros Gulf Turkey and visited ports in Turkey Greece Italy Crete and Sicily before returning to the United States on 12 February 1958 and resuming local operations out of Little Creek. Following overhaul and refresher training she again deployed to the Mediterranean with the 6th Fleet in September 1958 serving as part of Service Force Mediterranean before returning westward once again to the United States and operations off the east coast and in Caribbean waters.

On 16 June 1959 Terrebonne Parish commenced an inland seas cruise transiting the St. Lawrence Seaway and calling at Iroquois Cape Vincent and Port Weller Ontario; Ashtabula Ohio; Kenosha Wisc.; Chicago Ill.; Milwaukee Wisc.; Cleveland Ohio; Erie Pa.; and Port Colburne and Rochester N.Y. before returning to her home base of Little Creek on 6 August. Also in 1959 the ship participated in Exercise TRALEX -- one of the largest amphibious exercises conducted in that year

Terrebonne Parish conducted yearly deployments to the Mediterranean with periodic overhauls and exercises through 1961. In late October 1962 after the presence of Soviet missiles was detected in Cuba the United States instituted a "quarantine"throwing a naval cordon around the island. During these emergency preparations the LST operated with the Atlantic Fleet Amphibious Force through December when the crisis finally subsided. Attached to Amphibious Forces Atlantic Fleet Amphibious Squadron 6 the ship conducted operations off the Virginia Capes in January and February 1963 and then was overhauled in Jacksonville Fla. before she again sailed for the Mediterranean.

During her 1963 deployment with the 6th Fleet Terrebonne Parish participated in MEDLANDEX a joint United States-Spanish exercise wherein 3 000 American and Spanish Marines were landed with support from carrier-based aircraft. The ship remained in the Mediterranean into February 1964 before returning to the United States for amphibious exercises in the spring at Onslow Beach N.C. and off Camp Pendleton Va. She proceeded to New York in July to visit the New York World's Fair before taking part in an amphibious exercise with marines and midshipmen off Camp Pendleton.

Early in the autumn she embarked the men and vehicles of "G" Company 1st Battalion 2d Marines and proceeded for Huelva Spain to take part in Exercise "Steel Pike" -- where the ship became the first LST to "marry" to an eighteen-section causeway for landing her embarked vehicles. For the remainder of her deployment the ship took part in landing exercises off Sardinia and Corsica and made visits to ports in Italy France and Spain spending the Christmas holidays in Barcelona Spain and New Year's at Valencia.

Returning home to the United States towards the end of March 1965 the ship transported a Marine missile detachment to the Caribbean and then underwent extensive overhaul for four months by the Bethlehem Steel shipyard at Baltimore Md. After refresher training Terrebonne Parish got underway for the Caribbean on 3 March 1966 to begin a four-month deployment to participate in exercises and operations involving beachings and landings. The ship next made two lifts to the Dominican Republic in late August and early September. During this Caribbean tour a locking device was developed for the sand flaps on the ship's bow doors to keep them secure while underway. Tests proved that these new devicesinstalled in January at San Juan Puerto Ricowere very efficient. As a result this modification was approved for all LST's.

Terrebonne Parish commenced her 7th Mediterranean deployment on 30 March 1967 when she embarked marines of the 1st Battalion 6th Marine Regiment at Morehead City and crossed the Atlantic in company with four minesweepers of Mine Division 83. Upon arriving at Aranci Bay Sardinia on 19 April the ship joined Amphibious Squadron 6 Task Force 61 and soon participated in Exercise "Fairgame Five" -- a Franco-American amphibious exercise which brought together elements of the French Army Navy Commandos and Foreign Legion as well as a joint Navy-Marine team.

The ship headed for the western half of the Mediterranean and proceeded to Italy and Crete for further exercises. While the ship was at Taormina Sicily in late July volunteers from her ship's company and embarked troops went ashore to battle a raging brush fire threatening the town of Giardini.

Leaving Taormina on 7 August and arriving at Porto Scudo Sardinia on 12 August the ship took part in further amphibious exercises before she reembarked her marines after field exercises and proceeded to Malaga Spain for further amphibious training operations. The ship subsequently departed Rota Spain on 2 September for her return voyage to the United states.

Deploying to the Mediterranean in 1969 the ship moved to the Caibbean early in the following year and also conducted exercises off the east coast before returning to the Mediterranean in late 1970 for her ninth deployment. The following year still homeported at Little Creek Va. and operating under command of Amphibious Forces Atlantic Terrebonne Parwh deployed to the Caribbean for exercises and training activities. These included an operation from 5 to 10 August 1971 in which United States Army and Panamanian National Guard units participated.

Soon after returning from Panama the ship began preparations for her upcoming transfer to the Spanish government. On 29 October 1971 the ship was decommissioned and turned over to the Spanish Navy at Little Creek Va. Subsequently renamed Velasco and designated L-11 the ship served Spain into 1980.