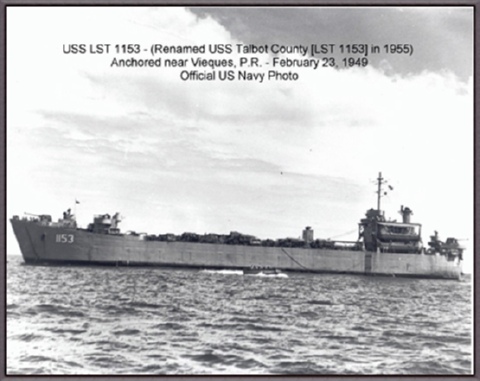 LST-1153 reported to the Fleet Training Group at Norfolk to begin her shakedown cruise on 21 September. She returned to Boston on 24 October for a postshakedown yard period and put to sea again on 15 November. Eleven days later she arrived at her home port Little Creek Va. For the next nine years the tank landing ship operated along the east coast of the United States from New England to Florida and in the Caribbean. On 1 July 1956 LST-1153 was named Talbot County.

Talbot County deployed to the Mediterranean on 31 August 1959 using her bulk fuel tanks to carry more than 240 000 gallons of aviation gasoline to refuel the helicopters of the amphibious squadron attached to the 6th Fleet. After making port calls in France Italy Greece Malta Gibraltar Algeria and Morocco she returned to tie United States on 13 February 1958. The ship was deployed with the 6th Fleet again from April to August 1959 and from October 1960 to May 1961. The remainder of her time until 1970 was spent in operations along the Atlantic seaboard ranging from Key West Fla. to Nova Scotia and various ports in the Caribbean.

Talbot County was decommissioned at Orange Tex. on 3 April 1970 struck from the Navy list on 1 May 1973 and subsequently scrapped.