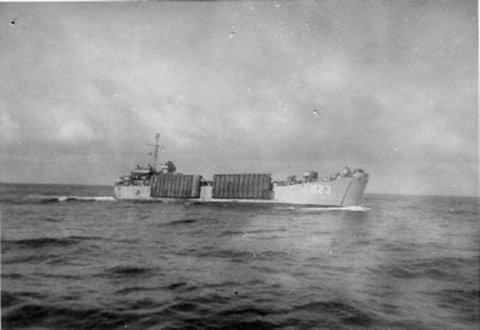 Completing shakedown toward the end of March, LST-1123 loaded cargo at Mobile, Ala., and sailed for the Pacific on the 29th. She arrived at San Diego in mid-April; transported rescue boats to San Francisco; and departed the latter port on the 22d loaded with LVTs, vehicles, and fuel oil. On 2 May, she arrived at Pearl Harbor; offloaded her cargo; and then commenced amphibious exercises. On 2 June, with Army Quartermaster Corps and Navy Construction Battalion personnel and cargo embarked, she sailed for the Marshalls, Marianas, and Ryukyus.

Arriving off Okinawa on 28 July, she remained there until after the Japanese surrender, then returned to the Marshalls and Marianas. During September, she carried occupation troops from the latter islands to Kyushu, Japan. Then, in late October and early November, she performed a similar service for units moving from the Philippines to Honshu.

On 9 November, LST-1123 departed Honshu and sailed east. Steaming via the Marianas and the Hawaiian Islands, she arrived at San Francisco on 8 January 1946; underwent overhaul at Seattle; then commenced operations out of San Diego. For the next four years, • the LST continued to ply the waters off the west coast, primarily in the California area, but with occasional cargo and training operations in Hawaiian and Alaskan waters.

In late June 1950, while LST-1123 was undergoing overhaul at San Francisco, the Army of North Korea crossed the 38th Parallel asd pushed south to occupy most of the Republic of Korea (ROK). By the end of July, the LST had returned to San Diego; loaded Construction Battalion equipment at Port Hueneme; and sailed west.

At Yokosuka by the end of August, she shifted to Kobe; and, on 10 September, sailed for the embattled Korean peninsula to participate in the amphibious landing at Inchon. On the afternoon of the 15th, she anchored off Blue Beach and began launching LVTs under protective fire from the covering force. Then, she remained in the Inchon area into October, shuttling passengers and cargo from transports and cargo ships in the harbor.

On 15 October, she departed Inchon. Ten days later, she arrived off Wonsan and, as the 1st Marine Division was landed administratively on the Kalma peninsula, commenced shuttle operations similar to those at Inchon. From 1 November until 3 November, she transported ROK Marines to, and landed them at, Kosong; then shifted back to Wonsan.

By the 18th, U.S. Marines had reached the Chosin Reservoir; ROK forces were moving on Chongjin; and U.S. Army units were pushing toward North Korea's northern borders. Hungnam had been chosen as a new supply center, and LST-1123 was ordered to carry tanks and other vehicles to that port.

Arriving at San Diego on 23 May, LST-1123 conducted local operations through the remainder of the year. During the winter of 1952, she underwent overhaul at San Francisco; and, on 26 May, got underway to return to the Far East. On 30 June, she arrived at Yokosuka; shifted to Sasebo at the end of the month; and, by 2 August, was back in Pusan harbor to start her second tour in the Korean combat zone.

Shuttle runs to Japan and to Pongam Do occupied the first part of the month. She then returned to Japan and, into October, conducted training exercises. On 10 October, she sailed for Korea. On the 15th, she participated in an amphibious feint at Kojo; and, on the 17th, she returned to Japan. By the 20th, she was back at Inchon, whence, into late November, she carried ammunition to U.N.-held offshore islands.

LST-1123 spent December at Yokosuka; and, in January 1953, she steamed back to Inchon. From there she sailed to Pusan; made cargo runs to Kojo Do and back to Inchon; then proceeded to Yokosuka, whence she sailed for San Diego, arriving at the latter on 5 March.

For the remainder of 1953, LST-1123 operated off the west coast. In January 1954, she again sailed for the Far East. She delivered landing craft and vehicles to Yokosuka in late February; conducted amphibious evercises in the Volcano Islands in March, off Korea in April, and in Japanese waters in July. During those months and through September, she also carried cargo between Japanese and Korean ports. In October, she sailed for home.

After her arrival on 10 November, LST-1123 operated off the west coast into 1955. That spring, she began inactivation at Astoria; and, in the summer, she returned to San Diego. Named Sedgwick County on 1 July 1955, she was decommissioned on 9 September and berthed with the Reserve Fleet.

Sedgwick County remained berthed at San Diego until recommissioned on 4 June 1966. Assigned to Landing Ship Squadron 3 and homeported at Guam, she was ordered west in November for her first tour in her third western Pacific war. On her arrival in Vietnamese waters, Sedgwick County began carrying troops, cargo, and ammunition to Allied forces on the coast and in the Mekong Delta area. In late December 1966 and early January 1967, she supported operation "Deck House V" in the Delta area; then, from 2 to 13 January, she again conducted shuttle runs between Da Nang, Chu Lai, and Cua Viet. At mid-month, she headed for home; but, on 20 February, she departed Guam and headed west again. Early March was spent at Kaohsiung, Taiwan; and, on the llth, the LST returned to Da Nang to resume shuttle runs. Continuing resupply operations into April, she was back at Guam from 3 May to 5 June; but, by mid-June, she was again off the Vietnamese coast.

On the 12th, Sedgwick County arrived at Vung Tau, whence she resupplied ships conducting "Market-Time" operations. On 8 July, she anchored in Subic Bay for two weeks rest, then returned to Da Nang and cargo runs for the Naval Support Activity there. Her duties were interrupted at the end of August for a call at Hong Kong. She then returned to Subic Bay and Da Nang, resumed resupply shuttle operations, and continued them until late in December.

Christmas 1967 was spent at Kaohsiung; but with the new year, 1968, the LST returned to Vietnam. During January, she resupplied Cua Viet. Upkeep at Subic and a call at Hong Kong took her into February; and, at mid-month, she began supporting riverine forces from Vung Tau.

On 4 April, the LST returned to Guam for overhaul. In June, she conducted exercises in Japanese waters. In July, she returned to the Philinpines; and, on 18 August, she resumed support of "Market-Time" activities in South Vietnam as CTU 115.3.9. Relieved by Litchfield County in late September, Sedgwick County moved north to Da Nang; loaded a causeway section; then steamed for Subic and Guam. Arriving on 17 October, she sailed for Da Nang on 20 November to shuttle cargo to Cua Viet and Tan My. In late December, she headed for Hong Kong, thence, at the end of the year, continued on to Sasebo, Japan, for an extended upkeep period.

In mid-April 1969. Sedgwick County returned to South Vietnam and beejan a tour as sunport and re-supply LST for the Naval Support Activity, Saigon. During June and early July, she was in the Philippines; and, on 13 July, she returned to Da Nang to join in operations to redeploy Marines from Vietnam. On 6 August, she completed her second run from Vietnam to Okinawa; and, on the 8th, she headed for Guam.

Arriving on the 14th, Sedgwick County prepared for inactivation. She was decommissioned on 6 December 1969; and, in 1970, preparations were made to tow her to Vallejo, Calif., for berthing with the Pacific Reserve Fleet at Mare Island.

LST-1123 earned six campaign stars for operations during the Korean Conflict and six for service off Vietnam.